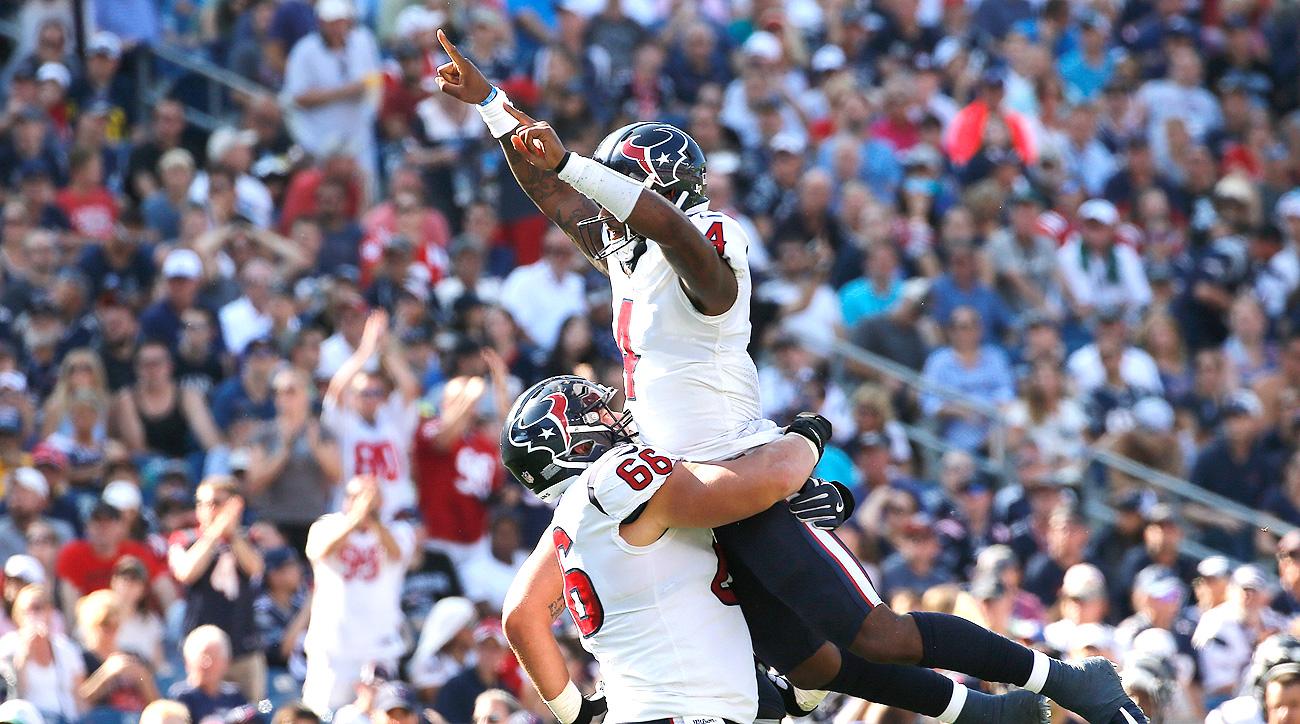 If you are all about getting hyped about quarterbacks this year, then this fantasy football Deshaun Watson player profile will get you pumped. As we gear up to the start of the NFL season, Football Absurdity is going to bring you a comprehensive breakdown of every notable player that will be available in fantasy football drafts.  When you don’t see us talking about Christine Michael or Mike Davis, don’t get mad at us for neglecting your favorite sleeper.  Get mad at yourself for having bad taste in football players.

Fantasy Football Deshaun Watson Overview: The only way to describe Deshaun Watson’s current ADP is absolute madness.  I understand that last year, in his rookie season, he had a four-game stretch that was unbelievable.  It was also unsustainable.  Sure, sixteen touchdowns in four games sounds great, but football is not played in the land of make-believe.  If he were to average four touchdowns a game for an entire season, he would beat the single season record of 55 touchdown passes, set by all-time great hall of fame quarterback Peyton Manning, by nine touchdowns.

I think that is maybe asking a bit much for a guy entering his second season.  To even be 10th on the all-time list, he would have to average 2.5 touchdowns a game the entire season.  Basically, his ADP is terrible value.  People who draft him this early are the kind of people who, after winning a lot of money on a scratch off ticket, decide to put all their winnings down on the PowerBall.  It is a bad value play.

Fantasy Football Deshaun Watson Strategy:  Don’t take Watson at his current ADP, when you could draft a guy like Larry Fitzgerald, Josh Gordon or any number of players who have had sustained success in the NFL for more than four freaking games.

Ceiling: If you are lucky, Watson just chucks bomb after bomb to DeAndre Hopkins and Will Fuller, shattering NFL records and my draft profile of him.  You take the winnings from your fantasy league and decide to go to Vegas and really ride this hot streak.  After four hours of doubling up on craps, you find yourself comped with a luxury sweet, where you meet Warren Buffet and he gives you some savvy financial advice that you use to turn your fantasy winnings into long-term wealth.  Years later, as you are sipping mimosa’s on your yacht, which you named Deshaun Watson, you find yourself laughing at that poor, dumb fantasy blogger who told you how only an idiot would draft Deshaun Watson.

Floor:  What will actually happen is after you reached for Watson, your lack of depth at other positions will drop you to the bottom of the league.  Realizing your wife is already mad at you for wasting money on make-believe football, you decide you have to find a way to get that scratch back.  You head to Vegas, but quickly go down big.  After pawning the watch your late father gave you, you start entering more seedy gambling establishments.  The last memory you have before losing the last of your money is an irate bookie taking your thumbs.