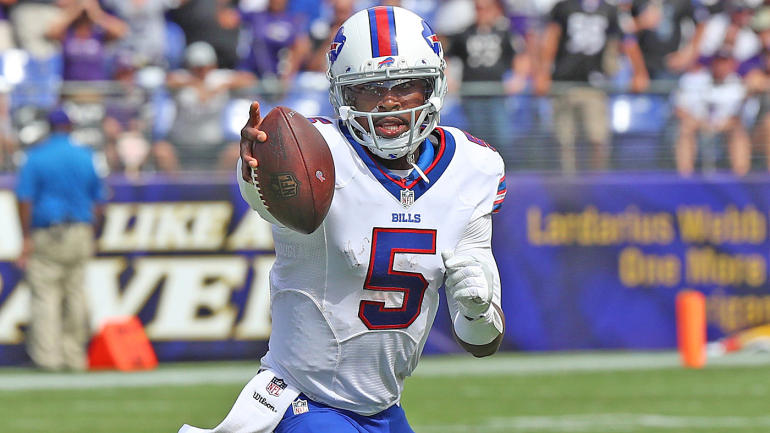 This week my co-worker, Jeff Krisko, suggested that starting Jared Goff is the smart fantasy football play.  In our week nine quarterback sit or start counterpoint, I’d like to offer a different point of view on why starting Jared Goff isn’t just a good decision, it is the only decision.  I also will be, for the second week in a row, telling you why you should start Tyrod Taylor.

As Jeff pointed out, Goff has improved significantly this season, in large part to the works of Sean McVay.  This week, Goff gets to face off against a New York Giants defense that is giving up the 11th most fantasy points to quarterbacks in standard scoring leagues.  There is a lot to like about this matchup.

But the biggest reason why Goff is a must start is, quite simply, there aren’t a lot of good options out there.  If you were to pick your matchup based on defense, the most favorable matchups are going to the likes of Drew Stanton, C.J. Beathard, and Jacoby Brissett.  With those choices, you might be better off just not starting a quarterback.

If you have Jared Goff this week, you definitely need to start him.  There is a very good chance he ends up one of the best quarterback options for week nine.  But if you don’t have the luxury of starting Jared Goff and need some quarterback help, you should start Tyrod Taylor.

With Tyrod Taylor, there is good news and there is bad news.  The bad news is last week, he only threw for 165 yards. The good news is he did score two touchdowns and had zero turnovers.  He provided a solid floor and was a low-end QB1 in week eight.

This week, he is facing the New York Jets. (And he is playing them tonight, so if you are going to start him, you better start him.)  The Jets defense has given up the 7th most fantasy points to quarterbacks in standard scoring leagues.  In their first meeting, Taylor threw for 224 yards, 2 touchdowns and 1 interception.  He could very easily duplicate those numbers.

This week, the options for finding favorable defensive matchups for quarterback isbleak.  I cannot, in good conscious, recommend Jay Cutler one more time.  The starting options are either guys like Deshaun Watson, who is a no brainer, or Drew Stanton, whom starting requires you to have no brain.  This week, you should start Jared Goff.  And if you can’t start Goff, you should start Tyrod Taylor.