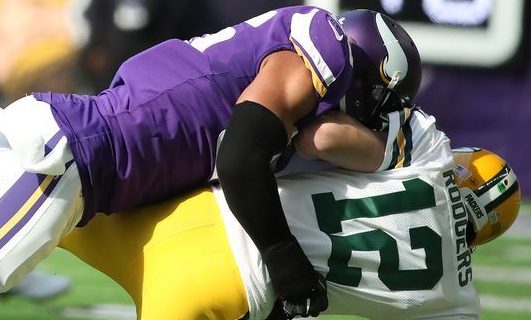 Week Seven: Fantasy Football Waiver Wire Quarterback aka Your Team Is As Fragile As Your Collarbone

Brett Hundley  – Owned in 1% of leagues – First off, a moment of silence for the now-dead fantasy team of all the Aaron Rodgers owners.  The question about Brett Hundley is whether he is worth burning your waiver wire position on.  That decision depends solely on the Rodgers owner.  If your waiver wire doesn’t have a lot of quarterback options, Hundley might be worth a speculative add.  If he has a good week seven, he could have value.  And if the Rodgers owner is desperate, he could provide short-term trade capital.

Ryan Fitzpatrick – Owned in 0% of leagues – Ryan Fitzpatrick is an interesting option that is solely dependent on whether Jameis Winston’s shoulder remains attached to the rest of his body.  Supposedly, he has already been throwing, so there is a good chance he doesn’t miss any time.  That means don’t burn your waiver wire on Fitzpatrick.  But monitor this situation closely.  Fitzpatrick will be a solid stream option if Winston misses a game and he could be a viable long-term start if Winston misses extended time.

C.J. Beathard – Owned in 1% of leagues – If you know who C.J. Beathard is, you have just outed yourself as a 49ers fan or a giant football nerd.  Even as a 49ers fan, I’m not sure there was a reason to know who he was before today.  But Kyle Shanahan has just named him the new starter.  The good news is that information doesn’t change anything.  You don’t need to know who he is and you don’t need to pick him up off of the waiver wire.  Nobody is winning their fantasy football league on the back of a 49ers quarterback.