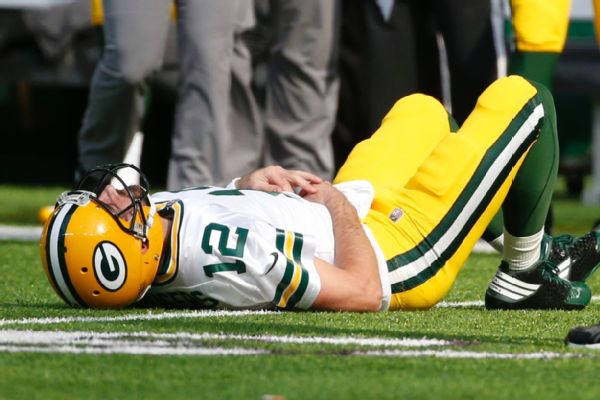 Week three has come and gone and with it any hope that our collarbones will remain intact.  Who knew monstrous men could do so much damage to one fantasy football team?  So let us sit back and examine how you have made every wrong decision a man can make.

Aaron Rodgers was by far the biggest disappointment of the week.  Many a fantasy owner is upset about the assassination of Aaron Rodgers by the Coward Anthony Barr.  Rodgers was drafted in the first two rounds of many leagues and this situation is a cautionary tale on why you don’t take quarterbacks early.  With Rodgers questionable to play again this year, only Brett Hundley can fill the Aaron Rodgers sized hole in all our hearts.

Michael Thomas had a pathetic 3 receptions for 11 yards and 0 touchdowns.  The number one receiver on many a roster broke the spirit of many a fantasy owner. Especially when they looked at the box score on the Saints/Lions match up.  The Saints scored 52 points and Thomas had nothing to show for it.

C.J. Anderson was almost as disappointing as the Denver Broncos in week six, rushing  9 times for 17 yards.  What is more embarrassing is that he was stuffed by a New York Giants team that has given up the 12th most fantasy points to running backs in standard scoring leagues. He was beaten soundly by a New York Giants team that thus far has folded at the first sign of adversity.