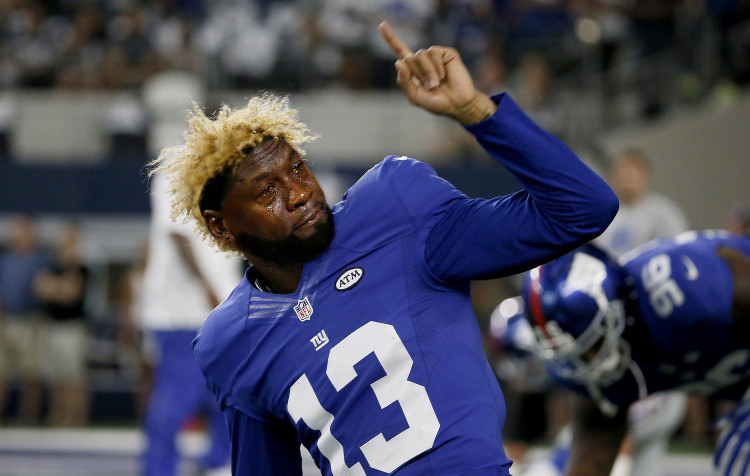 Scientists have calculated that, if humans had a button that let us fast forward through the boring parts of life, the average person would only live for about 2 weeks. For those watching NFL preseason for the fantasy football implications, those two weeks feel like two years.

Nothing better encapsulates this aspect of life than the preseason. We are expected to sit through over a dozen games featuring no-namers that might get cut, just so we can get a desperate glimpse of a starter playing for five minutes.

Well I say, “NO MORE!” Stop watching preseason games, get out there and enjoy your free time.

Odell Beckham, Jr: #13’s maudlin antics made this seem way more serious than it is now appearing. He has a sprained ankle. While there is no timetable for his return, he walked off the field. I’d be surprised if he missed week 1 of the regular season.

George Fant: The Seahawks’ left tackle has a torn ACL who will miss the season. There are two ways to look at how this will affect the Seahawks’ line: 1. Optimistically. Fant was a basketball star who didn’t play football until his NFL debut, last year. So maybe there’s someone better coming up. 2. Realistically: The best player Seattle could find to protect their cash cow QB was a guy who didn’t even play football. Now they have to replace him with someone who will most likely be worse. Stay far away from Seattle’s run game, and everyone involved. It didn’t work out last year, and this year is looking far more grim.

T.J. Jones: The #3 WR from the Lions left the game with a hamstring injury and did not return. No one is drafting Jones, but this is fantasy relevant because replacing him as WR3 is preseason week 1 sensation Kenny Golladay.

Bortles is bad and coaches started buzz that he’s going to be replaced with Henne. Until that happens, don’t draft Allen Robinson

Patrick Mahomes turned Kansas City fans into full-on Mahomesexuals, showing tight control and evasion. Still, don’t expect Chiefs’ WRs to get a bump up: Alex Smith is still a starter and probably won’t face a losing streak long enough for him to get pulled

James Conner is now a tier-A handcuff. Le’veon Bell is sitting out a lot of camp, which has a correlation with injury during the season. Conner toted the rock a whopping 20 times for 98 yards in his coming out party against the Falcons.

Trevor Siemian is starting for the Broncos. Note that a lot of pundits are bumping up Broncos in response to the news, even though Siemian isn’t very good.

Mitch Trubisky is still good. Cameron Meredith is back as a decent late-round flier option

LeGarrette Blount looks like poo. I had been quite high on Blount, this season. However, this week against the Bills, he looked into the camera, directly out my TV and though my soul, then slowly moved the ball 8 yards on 5 carries.

McCaffrey continues to cement himself as an overdrafted gadget player whose value to his team will far outweigh his value to fantasy drafters. CMC turned 5 touches into 72 yards and a score.

Derrick Henry is who we thought he was: The heir apparent to the decrepit King DeMarco. Once he gets the starting job, heads will roll for the new King Henry.

Kareem Hunt is getting justifiable hype, but it’s over-inflating his draft value. There’s nothing wrong with Spencer Ware, but Hunt’s flashy play this week has people reaching for him with a high mid-round pick and fetching double-digit bids in auctions. I prefer this chart from Fantasy Football Calculator, showing that Hunt has simply moved up from a mid-8th round pick ALL THE WAY TO… an early 8th-round pick.

Darren McFadden is still showing all indications that he is the true Elliott handcuff, running most of the reps with the first team offense

Don’t pick a Patriots RB unless it’s Rex Burkhead and it’s for exactly $1. Burkhead looked great this week, which compounds the New England backfield’s fantasy implications in a very-unsurprising way.

Gurley looks better, in conjunction with the progression of Jared Goff. This in no way justifies his shockingly high round 2 ADP/~$40 in auction

Dez Bryant had 55 yards and a touchdown. He’s best thought of as a value candidate, as injury concerns often lead leagues to letting him slip down to the $25 region ($200 budget)

Week 3 is traditionally the final week to see first stringers. Everything will wrap up Sunday, so tune in to FootballAbsurdity on Monday for the last piece of the puzzle needed to form your final rankings.