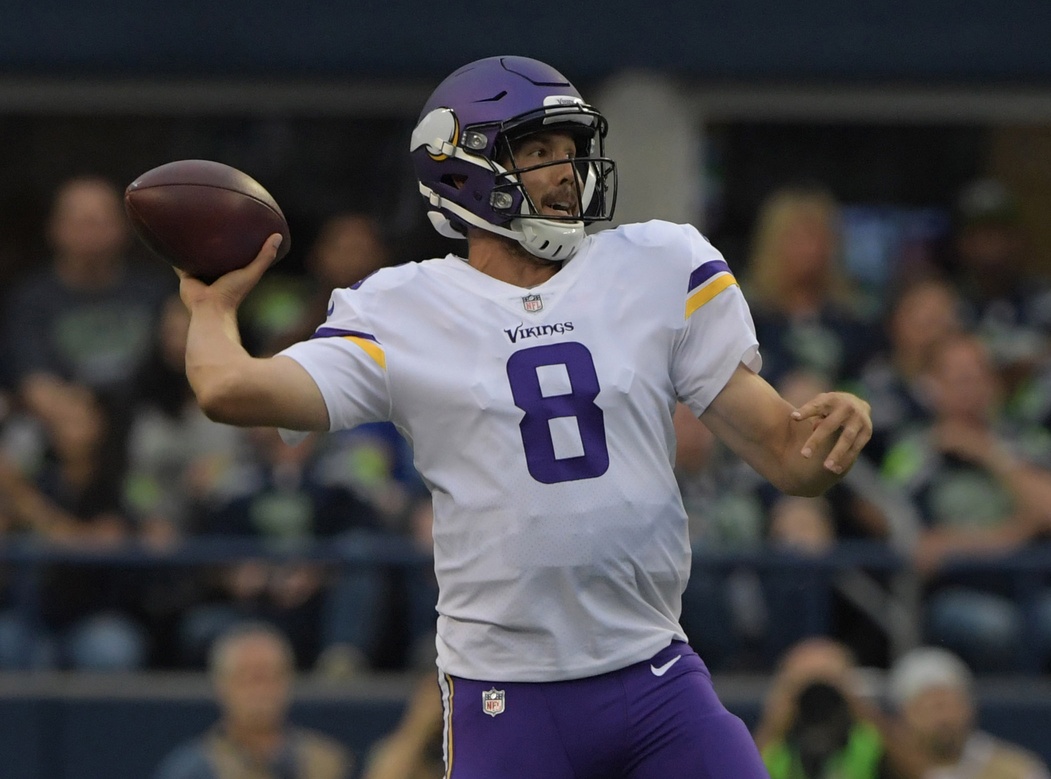 The Minnesota Vikings may have quietly put together a formidable fantasy football juggernaut thanks to the amazing quarterback play of Sam Bra–hahaha, sorry. They turned the team into a bunch of dinks and dunks and running, which made the team matriculate downfield with a million tiny cuts. That made them appear more prolific, but it’s the same veil cast over the Lions offense. It’ll lead to a bunch of PPR value in the Vikings offense.

Sleeper – Adam Thielen, Wide Receiver
It’s weird to think about a sleeper pass catcher from a Sam Bradford-led offense, but here we are. Mike Zimmer turned Bradford into a pinpoint accurate QB with play calling and route running. Thielen is a beneficiary of that offensive philosophy change. Thielen had a nice little year last year, totaling 69 catches for 967 yards and five scores. Those 967 yards was enough to land #25 on the wide receiver yardage list, to earn him a new contract, and it was more than A.J. Green, DeAndre Hopkins and Allen Robinson last season. It doesn’t track this year that he goes as WR47, behind players like Jordan Matthews and Rishard Matthews. He’ll sneak his way into your starting lineup more often than not this season, and he’s going at a backup wide receiver’s price.

Breakout – Stefon Diggs, Wide Receiver
Diggs started his 2016 campaign with back-to-back 100-yard games, going for nearly 300 yards in the first two weeks. He had only one other game over eighty yards for the rest of the season. He injured his groin in week four, and that seems to be the main culprit behind the abrupt change in production. Even while looking unimpressive due to injury for most of the last season, Bradford still targeted him 112 times in 13 games. If Diggs merely scales up his 2016 campaign, he will top 134 fantasy points. That would put him just above Emmanuel Sanders as the #21 wide receiver last year. He’s currently being drafted as the WR32.

Bust – Latavius Murray, Running Back
Latavius Murray was the big free agent pickup for the Vikings offense, and was set to take over for Adrian Peterson… right up until the Vikings drafted Dalvin Cook and Murray was shelved due to an ankle injury. Head coach Mike Zimmer praised Cook, saying that the second-rounder “has a chance to be special.” He’s not wrong, Cook slipped to the Vikes in the second due to off-field concerns, not on-field. He’s likely to take the bulk of the load from Murray, though Murray is set to be the goal-line back and steal a handful of touchdowns. Unless Cook is injured or somehow ends up in Mike Zimmer’s dog house (which isn’t outside the realm of possibility due to Zimmer’s rookiephobia), Murray will have no role on your roster. He’s currently going in the ninth round in twelve-team leagues. There’s no need for that, and he’ll be one of your first cuts to clear a roster spot.