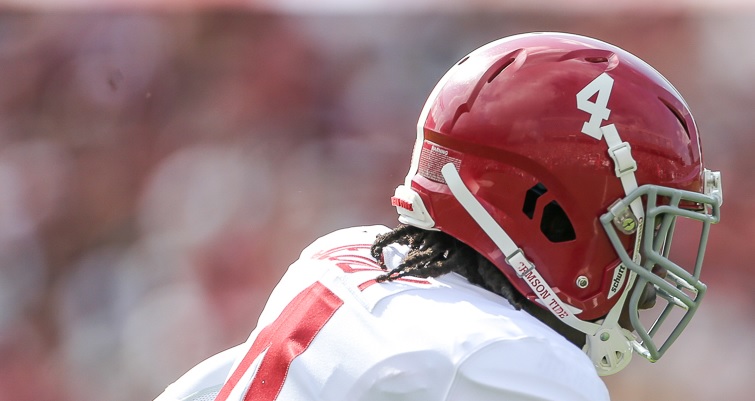 This article initially appeared for our Patreon subscribers in April 2020. If you want a head start on your leagues, it’s $3 a month for our award-winning content year-round!

With two distinct outliers (Tyreek Hill and Darius Slayton), generally, you want wide receivers picked inside the top three rounds, and you’re looking for guys who are drafted comfortably inside those first three rounds. There seems to be no correlation between which of the first three rounds the player was drafted in but ending up outside the first three rounds generally relegates a wide receiver to the dustbin of history in their redraft rookie campaigns. Obviously, there are outliers, like Darius Slayton and Tyreek Hill. There is also the question of undrafted guys like Victor Cruz or Wes Welker but trying to figure out which UDFA WR will break out their rookie campaign is like hitting a moving target with a bow-and-arrow from a mile away. We aren’t Legolas, people.

The strongest thing to learn from a player’s draft stock is that draft pedigree helps but should not be used as a shorthand for when and where to take a rookie wide receiver in redraft. After all, just look at the 2019 class. Interspersed between A.J. Brown and Deebo Samuel and D.K. Metcalf are Andy Isabella, N’Keal Harry and J.J. Arcega-Whiteside. Back in 2010, the only drafted rookie WR to end the season in the top-36 was the #15 receiver off the board (Mike Williams), and he was drafted ahead of Demaryius Thomas, Dez Bryant, and Emmanuel Sanders.

In short: a WR drafted in the first 100 picks had rookie year fantasy football value at an order of magnitude higher than players taken in the rest of the draft. Pedigree isn’t everything, but makes your shortlist shorter.

Can We Find Combine Darlings?

Well, yes and no. We already know who the athletic players in the draft will be from their college tape. However, a cottage industry has popped up to breaking up and breaking down the results from the underwear Olympics. Some statistics that people worry about are the player’s catch radius, the 40-yard dash, and aggregate scores for speed, burst, and agility. The average percentile finish for players who end up inside the top-36 is 70th-percentile 40-yard-dash, 75th-percentile speed score, 56th-percentile burst score, 58th-percentile agility score, and 69th-percentile catch radius. There are total warriors in there like Julio Jones, who is 95th-percentile or higher in four-of-five stats.

But we already knew that Julio Jones was a beast before the combine. Is there any correlation between any of the statistics, an average of the statistics, and finishing as a top-36 wide receiver? No. The best correlation coefficient (R) comes from the 40-yard-dash, but that has just an 0.36. The average of all their aggregate scores carries a correlation of just 0.079. You want to get as close to 1.0 or -1.0 as possible to have a causal relationship. You can see that none of the aggregate scores or an average of the aggregate scores from the combine mean anything. We already know who the best players are going into the combine, and trying to dig out a combine warrior to put on a pedestal in year one will usually end up with you scratching your head to figure out why it didn’t work.

What About College Production?

There’s a trendy aggregate secondary statistic that gained popularity in dynasty football circles. It’s PlayerProfiler.com’s Dominator Score. A Dominator Score is the percentage of a team’s touchdowns and yardage a player gained for their college squad (per PlayerProfiler.com, 45+% is exceptional). While a high dominator score has a high correlation to career success, let the tale of the 2019 draft class be your cautionary tale for using it for rookie wide receivers.

A.J. Brown, Terry McLaurin, Deebo Samuel, D.K. Metcalf, and Darius Slayton all finished within the top-36 at WR this year (half-PPR) in fantasy football. None had a dominator score over 32.6% in 2018, and their average finish was 27%. On the flipside, Hakeem Butler, J.J. Arcega-Whiteside, John Ursua, Scotty Miller, and Preston Williams all had dominator scores north of 40%. N’Keal Harry did, as well, but his injury-riddled 2019 gets him a pass from the wall of shame. While Dominator Scores can be a predictor of career success, that doesn’t mean that success manifests in year one.

So How Do We Handle In-Season Management?

Well, let’s look at the guys who finished in the top-36 last season as guideposts. A.J. Brown, Terry McLaurin, and D.K. Metcalf both turned out to become their team’s #1 option at some point in the season. Deebo Samuel led the league in WR rushing yards and had breakout games without George Kittle due to an injury. Darius Slayton came on in the second half but was mostly buoyed by three massive games interspersed throughout the season and didn’t offer any consistent value.

When Should I Sell High?

If you discount games missed due to injury (you’ll replace them in your lineups), the 24 wide receivers to finish as top-36 guys their rookie years steadily finish better than they started. On average, these receivers average 10.7 fantasy points per game (HPPR) in their first four games, and 13.4 fantasy points per game in their last four games. This trend continues for every year with multiple wide receivers, with Calvin Ridley and Amari Cooper starting hot skewing their difficult endings.

If a player starts their career hotter than a firecracker, sell high. Only Michael Thomas and Mike A. Williams started their career with four four-game quarters averaging double-digit fantasy points per game. Remember Calvin Ridley’s 2018? That also happened to Sterling Shepard, Amari Cooper, Kelvin Benjamin, Jordan Matthews, A.J. Green, and Torrey Smith. Since 2012, only Michael Thomas and Terry McLaurin averaged double-digit fantasy points in both the first and fourth quarter of the season. Starting hot is a big indication to sell high.

What About Buying Low?

On average, rookie wide receivers who finish inside the top-36 increase their production in every quarter of the season, with the following pattern (fantasy points per game, half-PPR)

That fourth-quarter jump is the money shot right there. Over the last five seasons, eleven wide receivers ended in the top-36. D.K. Metcalf is the only one of these players to take a step down in the fourth quarter of the season compared to their second-quarter and third-quarter fantasy points per game averages. All told, players who make the fourth-quarter leap spent the year averaging about 9.6 fantasy points per game in half-PPR.

What Does All This Mean?

Well, first and foremost, and I hate to say it: if you’re playing redraft, don’t listen to dynasty twitter and their shorthands. Their Dominator Rating scores rely on the law of large numbers, a concept that when applied to fantasy football, basically means that with the luxury of time, the cream rises to the top. Unfortunately, we do not have that luxury in fantasy football redraft leagues. We can also largely ignore the combine, as there’s no money stat or aggregate stat that leads to reliable fantasy football production.

Luckily, the combine, dominator score, all college production rolls up into one major thing that leads us down the path of fantasy football production: wide receivers drafted inside the top-100 picks end up as top-36 wide receivers at a rate 10x that of players drafted outside the top-100 picks (with one of those players going pick 101). The lesson learned there: don’t try to find the diamond in the rough and get guys in good situations going in the top-100. That’s right, baby: read the camp reports, but only the camp reports, of top-100, picks. We can worry about preseason darlings in the preseason.

How Do We Handle Our Rookie Wide Receivers?

By and large, however, rookie wide receivers don’t hold up over the course of the whole season. If one flashes on you early, move him like the hot potato that he is. But, what about marginally productive rookies? Guys hanging around the back end of fantasy benches? Target those guys. By and large, they blow up in the last 25% of the season, which could lead you to fantasy football glory. These are the guys who end up at the top of waiver wires that you can pick up and hold to see if they come on at the end of the season to put you over the top.

But, don’t forget the real lesson of this: 7.7% of drafted rookie wide receivers turn in top-36 fantasy football value their rookie year, and 16.8% of rookies drafted in the top-100 hit that number. You are free to take shots, but it’s pointless to point you in a direction now. Don’t stop once the draft is over, as the players who should flash usually flash at the back end of the season after consistent moderate production.

Long story short: get top-100 wide receivers in the draft. During the year, target rookie wide receivers averaging about 9.6 fantasy points per game that aren’t skewed by major early blowup games. Those are the guys who will help you win your fantasy football leagues.