The moon is made of green cheese, which is why the 2019 Packers defense seemed to shift like the tides. They made it all the way to the NFC Championship game, but there they were completely exposed for having a bottom 10 rushing defense. Also, 36-year-old Aaron Rodgers did not crack the top-ten in passing yards. With that in mind, we set out to make a Packers mock draft that fixes these two huge issues.

Oh, also they desperately need a second cornerback. They have one good cornerback and one who allowed the fourth-most yards of any cornerback in the NFL in 2019.

That’s a lot of needs to fill in our Packers mock draft, especially picking late in the first 5 rounds. But they’ve got to do this, for the Packers (and to fill our content hole).

Queen would be the best fit possible at 30. He specializes in inside linebacker play, which is what the Packers needed to stop those line-busting runs from getting well into their secondary. He’s got the natural instinct to shut down any plays that involve his zone. This is crucial for the team-based Packer defense.

At 6’4″ and 229 pounds, Claypool isn’t going to get bumped off of his initial route. The main criticism against Claypool is that he can’t use his hips to get a lot of separation. That’s okay: He can use his size to get a little separation, which is all Rodgers needs. This should hopefully be the key to getting that WR2 Rodgers needs to have his offense firing on all cylinders.

Robertson is a natural at his position, showing both pose and hunger. The downside is he is only 5’9″, but his college tape shows highlights of him successfully guarding receivers half a foot taller. At the end of the third round, this is as exciting a prospect as they’re going to get.

Stopping the run is this guy’s hands-down specialty. His blocking has brought tight ends to their knees, and he reads the gaps like a veteran. Will need to develop in several other areas to become an every-down starter but get him and the run defense gets noticeably better, right away.

He’s six-foot-five, he’s 300 pounds. Teams should always take a late flyer on a huge blocker, if they hit, it gives Rodgers more time to sort out the field.

Round 6: Oh, they’re not doing these.

The Packers have FIVE picks in rounds 6-7. I feel genuine empathy towards whoever has to sit in the Green Bay war room and try to decide which one of the 200 remaining candidates might actually be on the team come September.

Overall, Cheeseheads should be quite satisfied if this is how Green Bay’s draft shakes out. A key lynchpin is that in the multiple draft simulations I’ve run, there’s always 2-3 decent interior defensive lineman available at the end of round 4. This allows the Packers to work on their other holes while still being able to plug up the gap with a good body. Good luck, Green Bay!

For more 2020 NFL Draft Coverage, check out these: 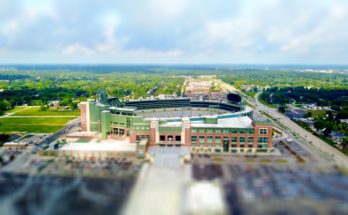