The 2020 NFL Draft is coming soon, and I’m excited. I’m partly excited that something is actually happening in the world of sports, but it’s more than that: While I usually have a dour take on my favorite team’s outlook, this year I’m optimistic about the Las Vegas Raiders. A solid draft could round out a developing team, and they have some extra early-round picks to get it done.

To start, I separated the Raiders’ biggest needs into tiers.

Tier One: WR and S

The Raiders are developing a short game talent, but we need a big play guy to really get our offense firing on all cylinders. With the 12th pick in our Raiders mock draft, Vegas has a chance at getting one of the top two WRs: Ceedee Lamb and Jerry Jeudy, widely considered to be the “A-tier” of this WR rookie crop.

The biggest question mark for Gruden & Co. is at safety. Injuries struck the Raiders’ top starters, forcing them to move cornerbacks into the safety position. We don’t have enough info on 2019 first-round safety Johnathan Abram, who got injured for season week 1. Either way, we need an actual safety to shore things up on top.

The Raiders’ whole defense has been in rebuild mode for several years, I’d feel much better if they used some of thei earlier draft picks on these pieces. To maximize the chance that they can develop one or more of them into a full-time starter.

So, my overall approach will be to leap on a receiver or safety, early.  After that, I’ll see if a good talent with question marks falls to the later rounds.

The Raiders have the following picks, this year:

This is going to be my favorite 2020 mock draft because I don’t have to do a writeup for a throwaway 6th or 7th pick!

This was a windmill slam, Lamb is the top-ranked WR on most boards and I am lucky we got him outside of the top 10. SB Nation even speculates that he will have the best career of any 2020 wide receiver. Even if he gets picked before then, almost definitely the clear second-best WR, Jerry Jeudy, should absolutely be there. I’m liking our chances of getting what might be the final piece to a solid offense with huge fantasy potential.

Another pick that gives me extreme confidence. McKinney is the #1 or #2 safety on most experts’ draft boards. What I value most about McKinney is his versatility. He will be a key boon for a Raiders squad that is 1-2 injuries from having to shuffle everyone around.

I am quite jubilant over the first two 2020 mock draft picks. We’ve put in a possible final key for our offense and made huge strides in solidifying our often woeful defense. I have to wait two rounds to pick again, but I’m alright with that, the way things have been going.

I didn’t really like any of the players available at this spot: With three 3rd-round picks, I want to pick players with high ceiling and see if any of them break out. We do need someone with potential at LB, and the versatile Dye fits the bill. Their goal should be to get him active in the weight room during the preseason: The added bulk could round him out into a passable starting linebacker.

I was not thrilled about having to pick twice in a row from a lackluster field. I decided to do as I thought the real Raiders would do. Jackson is a huge corner with impressive athletic stats. This hasn’t translated to the field all that well: Jackson lacks the instinct to stop runs from breaking out or make big plays. That’s just the kind of guy the Raiders love to reach for, so I pulled the trigger.

Now, we’re back on track. Davis was a highly touted recruit who had bad stats his last two years, sliding him out of first-round predictions. But he is still known for stopping the run. A run-stopper with a high potential for upside is a great fit for the Raiders at the end of the 3rd round.

Since I reached for a chancy CB in round 3, why not shore it up with a CB who is much more even, if not as flashy? Ojemudia has shown reliable instinct and discipline in reading the play out of the backfield. While he’s probably not going to ten pro bowls, he’ll fill in well should Lamar Jackson (Nebraska) turn out to be a whiff.

Raekwon Davis is another high risk, high reward pick that should have someone there to take his place should he flame out. I kind of like Murchison, who got honors both seasons on the Wolfpack. He could flop, but so could anyone! Give me the guy who can probably fill in at the last minute.

If Las Vegas emerges from the actual draft with players that resemble the ones from this Raiders mock draft, I’d give them a solid B+/A- grade. Full disclosure, I whined and whined about the Raiders’ first-round pick in 2019, who turned out to be the NFL’s offensive rookie-of-the-year. So, I guess I don’t know as much as Jon Gruden, sue me.

Check in to Football Absurdity at least once per day for insightful 2020 NFL Draft analysis tinged with humor caused by extremely high-fevered brains. Here’re some recent bangers: 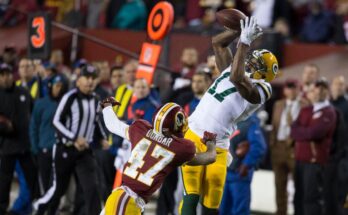