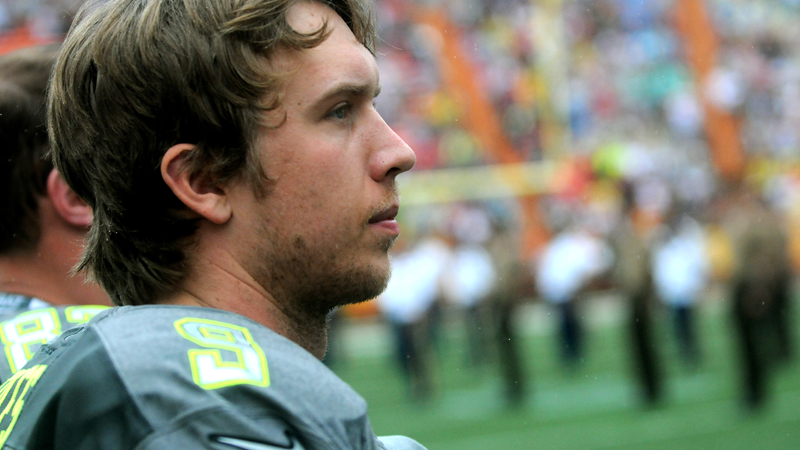 The Bears made their biggest splash of the 2020 offseason by trading a fourth-round compensatory pick to the Jacksonville Jaguars for Nick Foles.  The biggest story for the Bears this offseason was how they were going to address the quarterback position.  Mitchell Trubisky severely regressed in his second year in the Matt Nagy offense. Rather than being a force for the Bears, he forced the Bears to look for an insurance policy.  So what does this trade mean for our 2020 fantasy football leagues?

According to Adam Schefter, The Jacksonville Jaguars traded Nick Foles to the Chicago Bears for a compensatory fourth-round pick (No. 140 overall).  This move surprised many because the Jaguars had just signed Foles to the franchise’s largest-ever QB contract.

On the surface, trading for Nick Foles seems like the Bears have recognized that, with the talent they have on defense, they are in win-now mode and need to have a back-up plan for when Mitchell Trubisky inevitably fails.  In actuality, this trade is just Ryan Pace throwing bad money at worse money.

After this trade, the Bears will have two second-rounders and then don’t pick again until the fifth round.  And while I do not begrudge the Bears their lack of a first-rounder, since they have Khalil Mack to show for it, the rest of their draft capital has gone to players like Leonard Floyd, David Montgomery, Mitchell Trubisky and Anthony Miller.  Not one of those players has shown they were worth the extra draft capital than they cost to obtain.  Which means the Bears find themselves needing to shore up multiple positions on offense, but now lack the draft capital to do so.  It is also worth noting that Ryan Pace hates compensatory picks so much, he couldn’t wait to trade the first one he’d received in his tenure as GM (I don’t know if this is true, but it feels true).

You might be wondering what any of this has to do with Nick Foles.  It’s simple.  The Bears may have one of the best defenses in football, but they are severely lacking in talent on the offensive side of the ball.  Outside of Allen Robinson, the Bears don’t have any playmakers of note.  Sure, the Bears signed Jimmy Graham to play tight end, so the argument can now be made that they’ve gotten worse at tight end.

A little known fact is that Trubisky wasn’t the biggest problem with the Bears offense. The Bears offensive line in 2019 was atrocious.  They played poorly enough that I’m not sure how to evaluate David Montgomery.  Montgomery played about as well as any NFL running back repeatedly getting hit three yards behind the line of scrimmage could.  And all the Bears have done to shore up this issue was firing one of the best offensive line coaches in football and signing Germain Ifedi, who is best known for helping us all marvel at how good Russell Wilson is at scrambling outside of the pocket.

All of this is for me to say that whoever wins the job as the starting quarterback in Chicago, be he Mitchell Trubisky or Nick Foles, the only real loser will be your fantasy football team if you find yourself having to start them.

The Jaguars Without Nick Foles

Let’s be real here.  With or without Nick Foles, the Jaguars are not doing anything of note in 2020.  They are in the middle of a full rebuild and getting anything for Foles was a good decision.  Whether Gardner Minshew is their quarterback of the future has yet to be determined, but given Foles’ age, he was not going to be a part of the team when they start winning again.  Or maybe start winning, since I can’t remember the last time the Jaguars were winning consistently.