The Bucs’ Season Is Over

Look at you NFL, halfway done with your season and what do you have to show for it? Two undefeated teams, a slew of quarterback injuries, and refs who may or may not be watching the play on the field. It’s been an exciting start to the season but as the pumpkin spice comforts the chill in the air let’s be clear about one thing: The Tampa Bay Bucs embody the hot mess their city provides thrifty tourists all year long. I am sorry for your loss Bucs, but your season is over.

The NFL world seems to be all done with the belief that Jameis Winston will be a legit NFL quarterback. It seems certain that he will be transitioning to a new team, new city and likely new clipboard next year as long as logic presents itself. However, Coach Arians, like all old men, loves a rebuild project and Jameis is that old car mom wishes he’d give up. Tampa is a Gulf coast city that is used to seeing scraps wash ashore, it’s fitting that the 2019 season drifted in this Sunday with a loss to the sputtering Tennessee Titans.

The Bucs came into week eight with a 2-4 record and on the ropes for the postseason. Arians has seen some flashes of brightness from Winston but he tends to love connecting with the opposing secondary more than his WR core.

This game has an asterisk as the Buc were hosed on an inadvertent whistle towards the end of the game. Regardless, four turnovers in a game will likely lead to a loss, even if the team is led by Ryan Tannehill. Tennessee’s fourth-best scoring defense feasted on the errant game play of Jameis.

Perhaps nothing better summarizes the Bucs than the fact they outgained the Titans yet were forced to kick three FG’s (two inside the five yard line!). Arians is trying to right the direction of this franchise but not scoring a touchdown inside the five on separate drives?! That’s some Matt Nagy-level game calling.

Coach Arians pointed one finger after the game, “the receivers totally screwed it up.” Fortunately, when the Bucs landed, the players were able to escort the 67-year-old Arians back to his senior community where he could then bicker about the cost of good puddings.

The headlines on this game will likely be about the Titans forcing four turnovers in the game. A team doesn’t force turnovers on the Bucs and Jameis Winston, they’ll give those to you even if you don’t ask nice. The Bucs won’t come close to making the playoffs in their competitive division: Their season is over. 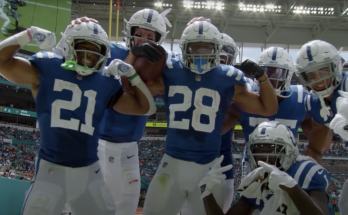 Indianapolis Colts, Sorry For Your Loss!

One Comment on “Sorry For Your Loss Week 9: What the Buc?!”