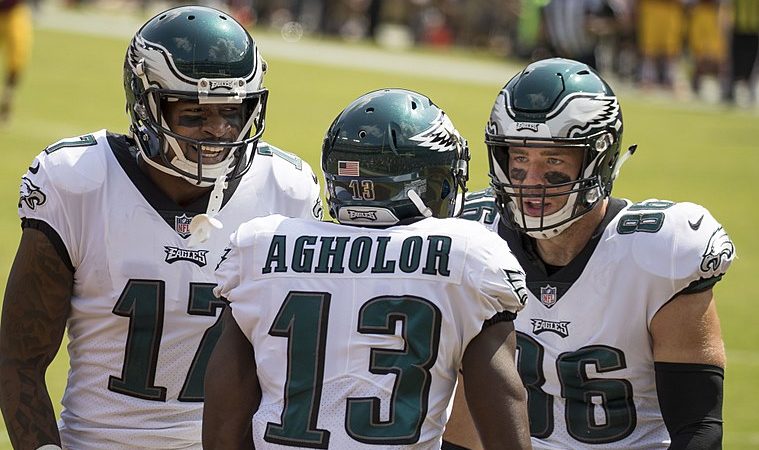 Thursday Night Football is an incredibly cursed fantasy football experience. I’m more than willing to give Nelson Agholor a pass for his one target, zero catch effort on TNF against the Packers last week. He should still be the #2 wide receiver, with DeSean Jackson likely not returning for week five. Let’s not forget that before the incredibly wild TNF game, DJax had 23 targets for 157 yards and three touchdowns in the two games prior. In fact, even if you account for his goose egg on TNF, he’s still averaging double-digit fantasy points in the last three games in standard scoring. Alshon returned on TNF, so don’t expect double-digit targets, but you can also expect significantly more passing for Carson Wentz. Agholor has a great chance to produce this week, as he gets a Jets squad allowing the third-most fantasy football points to WRs this year, as five players have at least 11.4 fantasy points in HPPR scoring settings in three games.

First, I’ll get the revelation that’s sweeping the internet out of the way: Au is the atomic symbol for gold, which means that Auden Tate is Goldden Tate, which makes two Golden Tates in the NFL. Okay, now let’s talk about Auden Tate. Tate is #2 on the Bengals in the last two weeks with 142 air yards to Tyler Boyd’s 145 air yards. The Bengals lost their #3 guy, John Ross (140 yards), which means there are a ton of air yards up for grabs on the Bengals. In steps Auden Tate into the John Ross IR void. Tate’s already been the most productive Bengal WR over the last two weeks, scoring 23.8 fantasy points. This week, he gets an Arizona offense that allows just one WR touchdown per game on average. Luckily for Tate, he’s done his damage through hauling in a ton of passes. Tate should provide a nice PPR floor if you’re desperate on Sunday.

This is the Evan Hoovler Special, as he’s screamed from the rooftops about Callaway’s return from suspension. He hasn’t played a down yet this season, but the Browns passing game needs a spark badly. You know it’s dire when people are unironically muttering, “Baker Mayfield really needs Rashard Higgins here.” Callaway is immensely talented, but he can’t keep his head on straight. Luckily for you, there’s no penalty for being dumber than a box of rocks. Down the stretch last year, Callaway had at least five targets in four-of-six games. In those games, he averaged 65 yards, and scored three touchdowns. This week, eh gets a Niners team that’s been strong against the pass… but who lost both starter Ahkello Witherspoon and backup Jason Verrett. With Richard Sherman likely getting Odell Beckham, Jr. duties on Monday, that leaves Antonio Callaway wide open to produce on MNF.