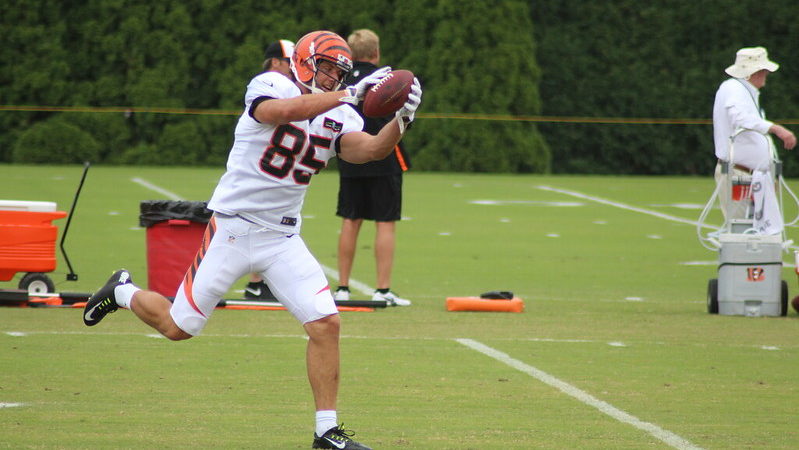 It feels like Herndon is universally owned, but that doesn’t seem to be the case. He hasn’t done squat this season except sit at home and serve a suspension. To know why people are excited about Herndon, look back at his rookie 2018 campaign. After he goose egged in week five, he played on an extremely useful pace. He averaged 7.9 fantasy points in half-PPR after that point. Had he put down that same average in the first three games this season, he’d be ahead of Jason Witten for the #11 tight end in HPPR. He might have to knock the rust off before becoming a reliable option this year, but he should hit the ground running. The Eagles currently allow the ninth-most fantasy football points against tight ends, with Vernon Davis and Jimmy Graham earning big days against them already this year. In PPR leagues, he could be a weekly set-and-forget player, in the Delanie Walker mold.

Please allow me to quote myself…

“Don’t look now, but Tyler Eifert has silenced the haters by playing in four consecutive football games. Just making us look absolutely terrible. Absolute trash. Tyler Eifert has five targets in three-of-four games this season (excepting an effort in Buffalo week three). To be honest with you… he hasn’t done a lot with those targets. However, he’s out-targeted C.J. Uzomah by a wide margin this season, making him Cincinnati’s main tight end. Hoo buddy, let me tell you a thing or two about tight ends going against the Cardinals. Thing one is three different tight ends notching at least 75 yards against them. Thing two is that they’ve yielded six touchdowns to tight ends in four weeks. It’ll be a cakewalk for Eifert on Sunday. Seriously, it’s like they forget tight ends exist. They average one tight end per week putting down at least 15 HPPR fantasy football points.” At such a crapshoot position, calling Tyler Eifert a sleeper is an obvious statement.

RSJ was a hot commodity for the Arizona Cardinals two years ago, but now he finds himself on the Cleveland Browns. He didn’t do much in his debut two weeks ago, but last week he hauled in 82 yards and a score against the Ravens. The 49ers, on paper, aren’t a great matchup as they allow the sixth-fewest fantasy points per game to tight ends. The only problem with that… they haven’t faced anyone this year. O.J. Howard and Vance McDonald are total busts and forgive whoever wrote that paragraph above, but Tyler Eifert isn’t anything to write home about, either. RSJ has a chance to have a big game, but it’s a definite desperation play for your fantasy football leagues.