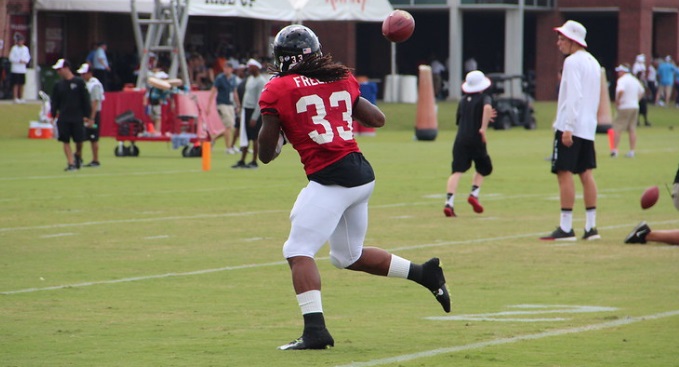 Overview: Freeman followed up three straight strong seasons with a 2018 cut dramatically short due to a bone bruise and sports hernia surgery. With Tevin Coleman out of the building, Freeman could get an uptick in touches if he can stay healthy.

Full disclosure, Football Absurdity co-owner Jeff Krisko is high on Freeman, whereas I am kind of in the middle. It comes down to whether you like to gamble on upside in the third round or get a safe floor. Freeman definitely has a huge upside, Atlanta’s offense should be potent and the only one in the backfield who could steal carries is the ho-hum Ito Smith. If that speaks to you, grab Freeman.

However, with my third round RB, I like a nice floor. Give me a boring guy who checks in with 10 points per game and never goes down, and let my two first round picks win the games for me. So I can’t use my third round pick on Freeman, who has picked up 7 injuries in the past two seasons. In addition to the hernia surgery, he’s had a bruised foot, a bruised knee, two sprained knees, and two concussions. I just can’t spend a third round pick or almost 20% of my auction budget on this sixth-year back. Don’t get me wrong, if he falls into the 4th round or around 15 % of my budget, I’ll snap him up in a heartbeat.

Best Case Scenario: Freeman doesn’t get injured and has his best season, yet, finishing as a top end RB1

Worst Case Scenario: Freeman gets dinged up throughout the season, but never misses time, ending up as a RB3 who owners mistakenly start week after week.