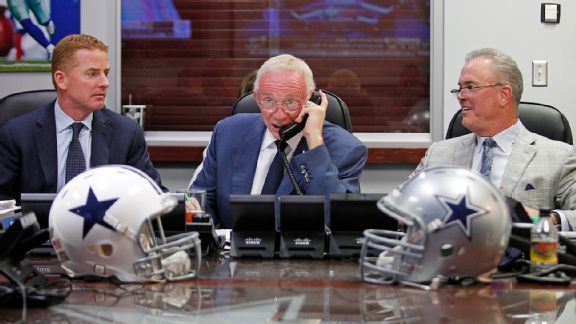 Jerruh, here. I’ve spent good money to buy air time on the Internet and I’m dictating this to my leggiest secretary, so listen up! I’m making all the decisions for this Dallas Cowboys 2019 mock draft, and anyone who says otherwise will wake up on the wrong side of the bars in an Arkansas jail.

I know what’s best for my ‘Boys, and by ‘gum, I’m gonna get it. If God hadn’t wanted me to be in charge, he wouldn’t have sent me three Super Bowl titles and a billion dollars. If this Dallas Cowboys 2019 mock draft comes true, we’ll have everything it takes to once again represent this great nation. There ain’t gonna be no anthem-kneelers in this batch, just apple-pie eatin’, mother-loving good ol’ boys.

For this Dallas Cowboys 2019 mock draft, I had my grandson help me with this draft simulator, which with this site is not affiliated.

Don’t have a first-round pick, don’t need it. Traded it for that Murray Cooper fella, who done us quite good. Don’t need a DE either, I’m sure  DeMarcus Lawrence will heal up as long as he prays on it. I know Randy Gregory has had his substance abuse problems, but I’ve been sending him to an abstinence program and am convinced he can Just Say No to PEDs without seeing any decrease in performance.

Johnson, Jr. is a natural fit in most zone-heavy defenses. The cornerback did great at the combine, great in the Senior Bowl, and I hear his video cassette tape footage is above reproach. I believe Johnson can excel at any scheme because the guru known as Jason Garrett can and will work miracles.

Jace Sternberger was available, but we don’t need no tight end. Jason Witten is coming back, and that guy is as wise as a schoolmarm and as spry as a mating junebug. This pick came down between Saunders and fellow DL Renell Wren of Arizona State. Wren seems better and more suited for the NFL, but analyst Benjamin Solak writes

I don’t know what all that means, but it has no place on God’s green Earth and no place on the good Christian field of Cowboy stadium. Saunders has no such devil’s filth writ about him. This beefy southerner clocks in at over 320 pounds but can run a five-second 40-yard dash. I feel pity for the guard that has to see Saunders bearing down on him like an eighteen-wheeler on an armadillo trying to cross the highway.

Gregory and Lawrence are great, but they ain’t gonna amount to a hill of beans if the dang ol’ QB can just throw it over them. Harris is an athletic prowess that can stick to defenders like molasses sticking to flapjacks. He ran a 4.4 forty and dropped 20 reps on the bench. An athletic freak shouldn’t be falling to the fourth round, but his resume is devoid of takeaways. We don’t need no takeaways, all we need is to stop them from going ten yards on three plays. Harris’ got what it takes.

Cooper ain’t gonna do no good if the defense is putting more bodies on him than Little Big Horn. Lodge should draw attention away with his 4.55 forty and 10-foot broad jump. Against opposing defenses, Lodge will take the top off like a sorority girl at Mardi Gras.

Despite the genius that is every one of our coaches, chosen by me and our Lord, my ‘boys couldn’t muster more than 22 average yards per kickoff return in 2018. Compare that to the 26.5 we allowed, second worst in the league. Their ain’t enough orphan finger in the world to shore up that dam, we need a solid prospect. Enter Montre Hartage. He has the quickness and tackling sense to make stops on kickoffs. He has experience returning kicks, too.

Dak Prescott has it in him to be the next Troy Aikman, if properly coached by Jason Garrett who has it in him to be the next Jimmy Johnson. All they need is time. It’s the seventh round, so I’m picking the biggest lineman available: 6-foot-5-inch, 300 pound Calvin Anderson. I don’t know if he’s any good, I don’t have time to watch footage of seventh rounders between my non-stop steak-eating, nap-taking regimen. I just want a guy to stand in between Dak and rushers. ‘Nuff said.

For more like this Dallas Cowboys 2019 mock draft, check out all of our mocks

View all posts by Jerruh J →