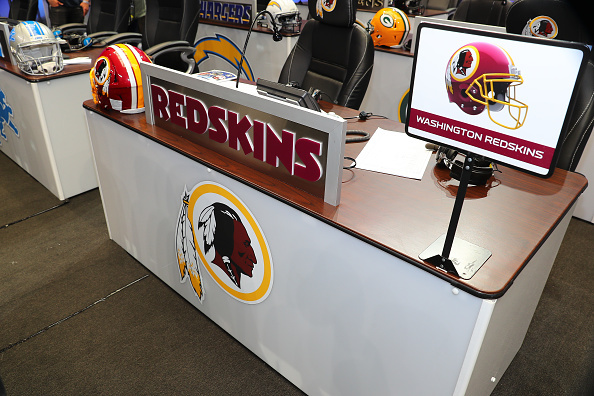 First, I’d like to thank Football Absurdity for welcoming me back and letting me write their Washington Redskins 2019 mock draft. I had been on an extended mental health vacation while I dealt with crippling OCD. Thanks to the holistic healing power of Dr. Sebastian Flowers, I am cured of my need to do everything in alphabetical order.

So, on to the Washington Redskins 2019 mock draft! I first started following the ‘skins when I heard that many Native American tribes were washing their hands of the organization. Having been a compulsive hand-washer myself, I knew this was the team for me. However, the need to do everything alphabetically kept me from rooting for the team that comes last. Finally, I am able to shed the shackles and root for my one true team, and that starts with a Washington Redskins 2019 mock draft.

I used this draft simulator, with which we are not affiliated.

Washington doesn’t get a first round pick. That’s okay, my #1 overall guy was still there halfway through the second round. Now, I know he is the first person, alphabetically, but that’s just a weird coincidence. Abram is a first-rounder on many draft boards.

The athletic safety should provide the coverage Washington sorely needs. His sub-4.5 forty-yard dash shows his strength as a vertical pass coverer. This will match well with superstar Landon Collins, who has a veteran eye for the game and can stay ranged. Between those two, Washington will easily have the most locked-down secondary in the entire league.

This two-time team captain will add time-in-the-pocket for Case Keenum. Adams, a 317-pound monster will be a solid wall against any interior linemen, but has the lateral speed (4.74 twenty-yard shuttle) to guard the edge, should the need arise.

I will admit, Washington desperately needs some star offensive players. However, we’ve seen time and time again that even superstars get stuffed when the offensive line is sloppy. Their O-Line ranked in the bottom half of the league according to Pro Football Focus, so prioritizing this area is a no-brainer. Paul Adams is a great fit for the team because of his skill, football knowledge, and not because he is the second player alphabetically, I want to be clear on that.

A successful draft must get some diamonds in the rough, and I think I’ve found one in this FAU lockdown superstar. This athletic freak turned heads so sharply that he was one of a limited group of players invited to showcase their skills at a special combination of drills in Indianapolis, last month. That’s right, Shaair is so special that scouts showed up just to watch him bench press, where he did a modest 16 reps.

His junior year saw him voted first-team all-conference in the elite Conference USA. Playing linebacker takes discipline, and Al-Shaair is such a rigidly devout Muslim that he prays 5 times per day! Washington allowed over 22 points per game, last year. While many pundits are advocating that Washington get some star offensive players, let’s be honest: Case Keenum isn’t going to win any games when the opponent scores 22. Let’s play around him instead of building around him.

“The more you try, the better your chances of success,” I often chant while locking and relocking my doors. That’s why the smart use of both the Washington Redskins 2019 mock draft third round picks is at the all-important linebacker position. The Redskins have a 3-4 scheme that perfectly fits what Alaka learned at A&M.

On the field, Alaka has what it takes to become a monster. He runs an under-five-second forty-yard dash, did 20 bench press reps at the combine, and can leap three feet in the air! Alaka led the Aggies in tackles his senior year and should bring that malleable skillset to the NFL.

Allegretti is so good he didn’t even compete at the NFL combine, knowing his tape would stand on its own. The perfect complement to early pick Paul Adams, Allegretti brings his imposing, six-foot-four, 310-pound frame to the field. His hands are over ten inches long, he could pick up opposing rushers by their helmets!

While many pundits have him as a late-round prospect at best, Dakota Allen is ahead of Zach Allen and even Josh Allen on my list! Although I already have the Redskins taking two other linebackers, Allen’s athletic talent is too monstrous to pass up. He did a whopping 23 bench press reps at the combine, and ran a sub-4.8 second forty-yard dash. Allen is definitely on my “A-list” when it comes to likelihood of becoming an NFL starter.

I think we can all agree that linebacker is the most important defensive position, so the Washington Redskins should definitely get as many as they can. Allen-Williams is an undersized edge rusher looking to make the move to LB in a 4-3 scheme. This is great insurance should Washington decide they want to move to a 4-3 scheme. Allen-Williams participated in the Combine and had many recorded stats there. Washington was 9th in special teams according to Football Outsiders, maybe the quickness of Allen-Williams will propel them to a championship (of special teams rankings).

I know, 5 linebackers whose names all start with A. But I assure you there’s more to it than that: Draft Analyst Jon Ledyard says this glowing quote about Allison:

“his lack of range, athleticism, coverage ability and explosiveness really limit his impact”

Well, fine, Ledyard, thanks for ruining my article. What does he know anyway? He’s in my 12th-tier of draft analyst rankings.

The player I really wanted, Ugochukwu Amadi from Oregon, got snapped up several rounds previous. That’s okay, Bruce Anderson is an explosive back from the all-time best team in college football history (division II). He’s a natural pass-catching back that could make a splash on special teams. Anderson has also proven physically versatile: He grew up in sweltering Florida but played college ball in the snow-driven winds of North Dakota.

View all posts by Oliver Crueger-Dunning →