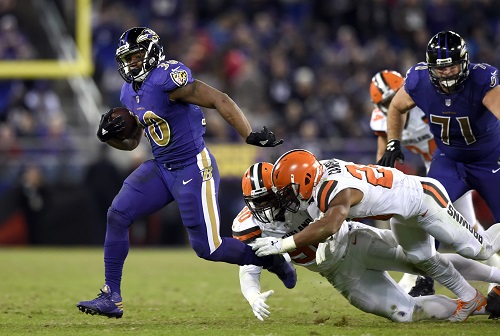 To be honest with you, this isn’t an article you should want to be reading during the fantasy football semifinals. If you’re looking for RB sleepers with your season on the line, you’re in dire straits and in desperate need of some punch. We are here to help, with three RB sleepers available in over 50% of Yahoo! leagues. For those of you in deeper leagues, one of these RB sleepers is available in 90% or more of Yahoo! leagues. These numbers are as of Wednesday afternoon, all apologies if they do not match your league exactly, especially if you don’t play on Yahoo! (not really, no apologies).

For weeks (it might be months now, actually), I’ve said that the Falcons will eventually turn to Ito Smith to see what they have in him for the 2019 season and beyond. That moment has already happened, as he’s out-touched Tevin Coleman in each of the last two games. Now, you have to temper expectations for Smith, as he hasn’t had a double-digit fantasy day since week nine, despite his increased touches. The reason I believe in the Good Judge Ito is the matchup. The Arizona Cardinals allow the third-most fantasy points to running backs on the year and are so bad that they couldn’t even shoelace tackle Ameer Abdullah if the were given the opportunity.  Zach Zenner chewed them up and spit them out last week. That’s kind of all you need to know. I’ll take the guy with double-digit touches in a great matchup if I’m digging in the RB sleepers discount bin.

The Gus Bus turned out to be more of a mirage than an oasis; a figment of our imaginations borne out of running back desperation. So… it’s time to go back to ol’ reliabl…y obnoxious in the Ravens backfield. It’s Kenneth Dixon time. He has double-digit touches in both of his games back and turned that into 14.5 fantasy points last week. Dixon received the prized “we gotta get him more involved!” speech from his coach following a good game this week. He also gets a Tampa Bay Buccaneers defense that allows the fifth-most fantasy points to running backs. The Buccaneers have supposedly stepped up their defense lately, but that doesn’t show in running back scoring against them; five running backs scored at least eleven fantasy points against them in their last four games.

If you’re brave enough to start Zach Zenner in your fantasy playoffs, then hat’s off to you. ZZ Top was inactive nearly all season, then took all the touches that I thought LeGarrette Blount would get last week. This is desperation-based touchdown-upside play, but at 1% owned, what else are you hoping for? This week, he gets a Buffalo team that allows the eleventh-most fantasy points to running backs and was lit up by Elijah McGuire of all people last week. If that doesn’t convince you: the Lions have given up five running back touchdowns in their last three games. And like I said… If you’re brave enough to start Zach Zenner, you’re braver than I am. Maybe the fantasy football gods will reward your bravery?

If you like what you see here, check out our other week fifteen sleepers pieces!
Joshin’ Around (QB Sleepers)
Full Nelson (WR Sleepers)
Firkser? I Hardly Know ‘Er! (TE Sleepers)