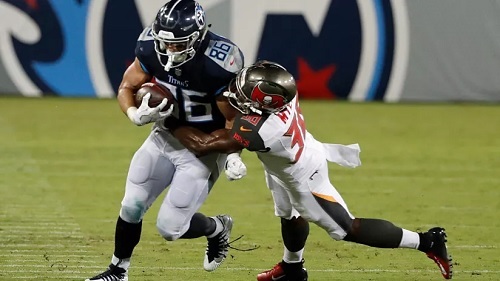 To be honest with you, this isn’t an article you should want to be reading during the fantasy football semifinals. If you’re looking for TE sleepers with your season on the line, you’re in dire straits and in desperate need of some punch. We are here to help, with three TE sleepers available in over 50% of Yahoo! leagues. For those of you in deeper leagues, one of these TE sleepers is available in 90% or more of Yahoo! leagues. These numbers are as of Wednesday afternoon, all apologies if they do not match your league exactly, especially if you don’t play on Yahoo! (not really, no apologies).

I’ve given up on Uzomah having a big breakout game on the TE sleepers list, but instead I will call him “cripplingly overdue for production regression given his target volume.” Uzomah can’t stop getting targets, but he also can’t seem to get a lot of yards or score. He is a PPR-based floor play at this point and given the touchdown or bust landscape of tight end, that could certainly be enough to make him a quality sleeper target. That is doubly true, given he has his best matchup of the year. Nay, the best possible matchup this week. The Raiders can’t stop opposing tight ends to save their lives, and Uzomah is a tight end playing the Raiders. It’s a match made in heaven.

Herndon, like Uzomah, seems to make the TE sleepers list every week. He turns in a good enough performance to have us crawling back for more. Unfortunately, that slipped over the last couple of weeks, as he had just six points combined at Tennessee and at Buffalo. Fortunately for Herndon believers, he scored over nine fantasy points in three of his last four home games, including seven catches for 57 yards in his last outing at MetLife. This week he gets a Houston defense that is fresh off of spankings (double-digit fantasy days in HPPR) from Eric Ebron, Jonnu Smith, Jordan Reed, and Jeff Heuerman in their last five games.

Firkser is the newest Tennessee Tight End to catch my eye. I am a disciple of Delanie, I jumped for Jonnu, now I’m freaky for Firkser. The Titans love funneling the ball to their tight end, and whether that has to do with Marcus Mariota being #ActuallyBad at football or not is not my place to say. Instead, I will say that the Titans Tight Ends have combined to score the thirteenth-most fantasy points at the position this season, and that’s finally all rolled up into one package, which puts Firkser firmly on the TE sleepers list. Firkser gets a completely underwhelming Giants defense that allows the sixteenth fewest (seventeenth most?) fantasy points to tight ends this year. Five tight ends have six or more targets against them this season, and four of them scored double-digit fantasy points.

If you like what you see here, check out our other week fifteen sleepers pieces!
Joshin’ Around (QB Sleepers)
Full Nelson (WR Sleepers)
Dixon, Dixoff (RB Sleepers)