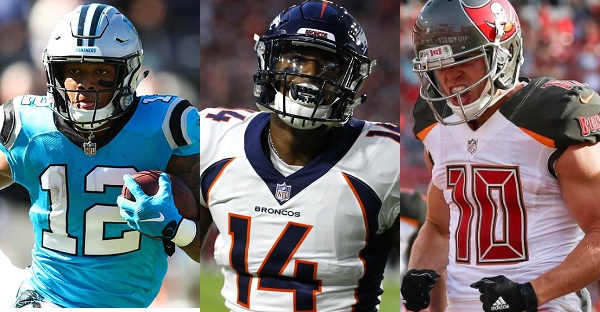 It’s the first week of the fantasy football playoffs in most leagues, and that means, statistically, fewer people than ever should be reading this article. Nevertheless, if you are reading this, congratulations on the playoffs! Our weekly start or sit articles hope to help you make some informed decisions in your league every week, and we continue by highlighting three wide receivers with good matchups this week.

DeSean Jackson is likely done as a Buccaneer, and Humphries & fellow WR Chris Godwin have done more than pick up the slack. Humphries is riding a hot streak to end all hot streaks, scoring five touchdowns in the last five games, notching at least six targets in three of those six games. His exceptional hands have gotten him plenty of additional , as he’s caught 26 of his last 31 targets. The Saints and Buccaneers are likely headed to a massive shootout this weekend, and Jameis will do that on the back of his wide receivers. That’s a smart move, as no other team allows more fantasy production to wide receivers than the Saints. That hasn’t changed lately, as five wide receivers in the last two games have at least 9.5 fantasy points against them If you need to figure out if you should start or sit Adam Humphries, you should start him, as he will slide in as a great WR3 option this week.

Demaryius Thomas is a Texan, and Emmanuel Sanders tore his Achilles, clearing the way for Sutton. I loved Sutton coming out of the draft, putting him as a top-three WR this year. The only question for him was always opportunity, and here we are: he’s the team’s #1 wide receiver by a country mile. This isn’t what the Broncos had in the cards for 2018, but the future is now. This week is a great opportunity for Sutton to kick the door down as a fantasy player you should start. The 49ers are absolutely dreadful on defense, and despite Richard Sherman being able to shut down a third of the field, he doesn’t travel. That means the Broncos can just move Sutton to the slot or the opposite side of the field and let him . Sutton went from sit to start this week, completely independent of his skill. That makes the question to start or sit Sutton a valid one, but he gets defense that has allowed multiple big WR days in six of their last seven games.

The Browns have a banged up and have faltered lately against opposing wide receivers. They’ve allowed ten double-digit fantasy days to wide receivers in their last seven games, so there’s plenty of there for D.J. Moore. I’m convinced Curtis Samuel will get his as a sleeper candidate, but he has done that recently, and that hasn’t slowed Moore. Moore has at least eight targets in each of his last three games, and he has at least 90 yards in two of those three games. With a good matchup and tons of targets coming his way, He is a great start candidate for those deciding if they should start or sit D.J. Moore this week.

These three middling WR2s are all great options to help your team this week, but if you’re trying to decide who to start or sit between them, I would go with