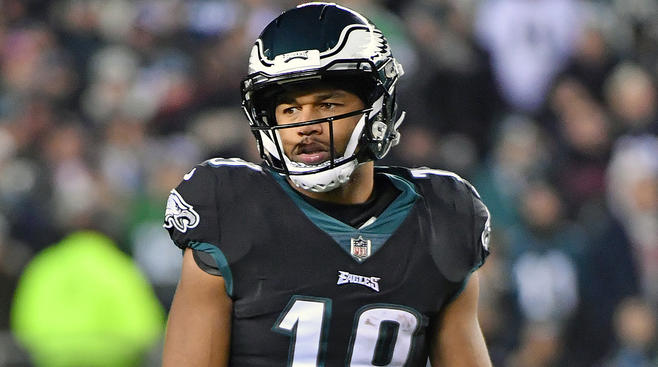 There is a monster who stalks me weeks 6-12 of every fantasy football season. He waits until I’m asleep, or blackout drunk due to rage from losing at fantasy football. For there is no joy in winning weeks 6-12, those are just a drop in the bucket of a complete season. There is only the desperate horror of losing, of realizing that this universe is not one where things are going to shake out fairly for me. I wake up during these weeks to find that the monster has eaten several fist-shaped holes in my wall. The wall is like my fantasy teams, even if most are doing well, I can’t stop focusing on the one that’s bad, the one with holes. I know that one day, the monster is going to run out of wall, and will eat a hole inside of me. When week 13 finally comes, I open the front door and gaze out into the snowy landscape. I can escape, I can leave the monster’s feeding grounds. But will my trail lead to the promised land of fantasy playoffs, or will I end up alone, freezing to death in the woods and praying for the monster to grant me sweet release?

These are the things I consider when deciding starts or sits for week 13. So you can rest assured: I take this seriously.

Ty Williams was a popular add mid-season due to a two-week stretch with back-to-back 118-yard receiving games. He scored three touchdowns total during that span. In the other eight games this season, he has 2 touchdowns. Many people are considering whether to start or sit Tyrell Williams in a shootout matchup versus the Steelers this week. Don’t fall for it, there will be way better weapons for Phillip Rivers to rocket the ball towards. Also, Williams has been nursing a quad injury. If you’re wondering to start or sit Tyrell Williams, the answer is “no matter your league, there is definitely a WR in the FA who is a better start.” Sit him.

Oh, Washington Redskins. You get us excited about your wide receivers as sleepers, every year, but never deliver. Not with Jamison Crowder, not with Maurice Harris, and definitely not with Josh Doctson. Doctson has topped 10 fantasy points in HPPR twice all year, and he’s gotten over seven targets once. Yet, this week more than ever, owners are considering whether to start or sit Josh Doctson. Doctson has a favorable matchup against the Eagles, who allow the second most fantasy points to wide receivers. Doctson seems to have benefitted from Colt McCoy: In McCoy’s first start he threw to Doctson 10 times. So why then am I advising you find someone in the FA rather than start Josh Doctson?

The answer is that two favorable recent stats aren’t enough to paint a bright picture this late in the season. There’s just too much data pointing the other way. Before last week, Doctson had not had a fifty-yard receiving game. Doctson has only found the end zone twice in eleven games. Washington’s offense has been battered by injury like a rowboat in a hurricane. Their quarterback is a journeyman with few successful starts under his belt. Their running back core is banged up. Their wide receivers were never more than mediocre. Last week’s 7 catch, 66 yard performance was an aberration from the usual and not a good one at that. Sit Josh Doctson for anyone.

A surprise mid-season trade turned Tate from decent flex starter to fantasy afterthought. With waiver wires getting pretty thin, many owners are wondering whether to start or sit Tate in a juicy matchup vs Washington’s mediocre defense. The answer, and this might come as no surprise, is a resounding sit. Tate hasn’t been able to produce one decent fantasy game since the trade, his ceiling topped off with a five catch, 48-yard game. He hasn’t scored for the Eagles. Carson Wentz admits he is banged up. There’s not a lot of meat to analyze here, you are better off with someone else from the FA, even in super deep leagues, than Golden Tate.

If you must choose between these three players, I’d rank them like this: