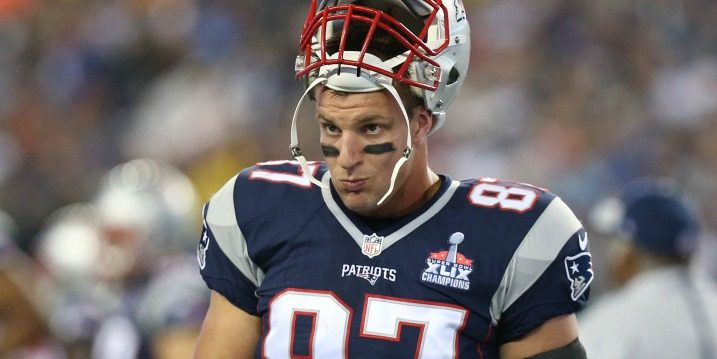 It’s fantasy football week nine, and the difficulty level matches the week. This week is one of two times this year that six teams are on a Bye. With Indianapolis, Cincinnati, the New York Giants, Philadelphia, Arizona and Jacksonville all on Byes, we are left searching for temporary replacement players. We at Football Absurdity want to help you decide whom you can start or sit each week, with this week probably being the most difficult so far. Each week we take a look at six players at each position (across two articles), and give you a break down as to why you should start or sit them. In this article, we hope to answer your questions about whether you should start or sit Rob Gronkowski, Trey Burton, or Austin Hooper?

Things haven’t gone great for Rob Gronkowski owners this season, as injuries have continued to mount for the talented tight end. His production has cratered as the presumptive best fantasy football tight end in the game has just three top-nineteen games on the year. Back injuries have been his main issue, but he’s failed to top 100 yards or score a touchdown since week one. He hasn’t been the tight end you hoped he would be, and he’s still nursing his back injury going into SNF against the Packers. The Packers are yet to allow a touchdown to opposing tight ends this season, and nobody has topped 72 yards against them. It’s two trends that are likely to continue this week. If you have an honest decision to make with regards to whether you should start or sit Gronk, sit him. Don’t go out of your way to do it and get cute, but Gronk hasn’t been Gronk this season, and there’s little to indicate that will change on Sunday.

Trey Burton is trading on pre-season reputation and on anomalous game two weeks ago. Against the Patriots, he had nine catches and 126 yards on eleven targets. The eleven targets equals his two other highest target games combined this year (six targets week one and five targets week three). Your average Trey Burton week is in the range of three catches on four targets and somewhere in the ballpark of 20 – 50 yards receiving. You’re hoping for him to score a touchdown to make your week work. When you factor in byes, Burton has the sixth worst matchup of the week, and Buffalo has stopped all opposing TEs from entering the end zone. Expect more of the same from Burton this week; the question to start or sit Trey Burton is a real one, and this week, he is a player you should try to sit, if possible.

Hooper spent two weeks lighting up fantasy football leagues on the back of 22 targets in two weeks, slamming down TE1 and TE4 games in those two weeks. Unfortunately, he managed to be the TE32, TE33, and TE17 in the weeks surrounding those two games. Now, the Falcons come off of their bye to take on a strong opponent. When factoring for byes, Washington is the seventh-worst matchup for Hooper to have this week. No tight end has gone for over fifty yards against them this season, and only three TEs have scored. Hooper has two games with a ton of targets, but everything surrounding that his year has lacked opportunity for him to produce. So, our answer to “start or sit Austin Hooper” is sit.

Starting these tight ends is not advisable, and wondering if you should start or sit them is worrisome. Personally, I would start them in this order:

One Comment on “Fantasy Football Week 9: Start or Sit Gronkowski, Burton, or Hooper?”