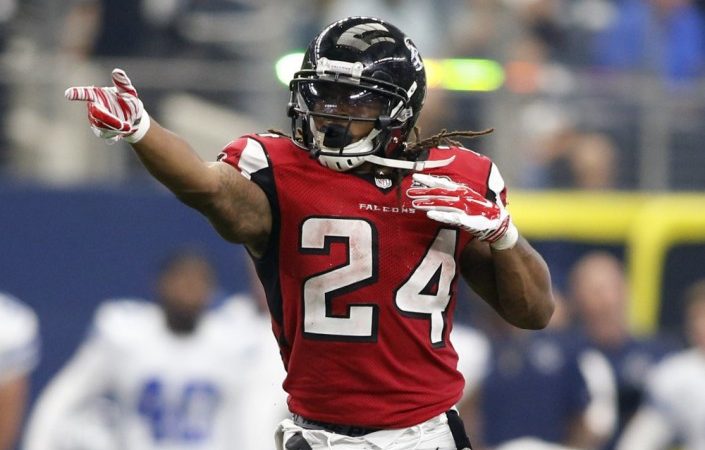 If you are wondering whether your running back will ever be great again, then this fantasy football Devonta Freeman player profile is for you.  As we gear up to the start of the NFL season, Football Absurdity is going to bring you a comprehensive breakdown of every notable player that will be available in fantasy football drafts.  When you don’t see us talking about Christine Michael or Mike Davis, don’t get mad at us for neglecting your favorite sleeper.  Get mad at yourself for having bad taste in football players.  We are only focusing on the top-rated running backs in standard scoring and points per game leagues.

Overview: On the one hand, Devonta Freeman has seen a steady decline in his play over the last three years.  On the other hand, he has still managed to be an RB1 all three years.  Unfortunately for him, he has fallen victim to the new hotness.  Freeman is fine now, but you know who looks really good?  Saquon Barkley.  Have you seen his legs?  They go on for miles.  Literally.  Like, that is part of his training regiment.  It’s easy to forget about Freeman, but maybe we shouldn’t?  I know that Steve Sarkisian is no Kyle Shanahan, but he is still feeding Freeman the football.  Freeman was averaging 17 touches a game, so I feel comfortable assuming he will maintain a high floor.

Strategy: I love Devonta Freeman at his current ADP.  He is a high floor/high ceiling guy to me.  We know he can be an RB1 because he has been an RB1 two of the last three years.  And we know he can be the number one scorer in fantasy football because he has done that too.  At his current ADP, you could find yourself with a devastating one-two punch at running back at the top of your draft.

Floor:  Barring injury, Freeman should still end the year as a low-end RB1 or maybe he even slips and falls to RB2 status.