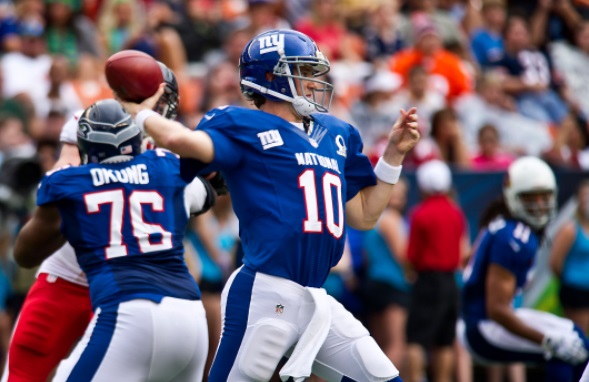 If what you need from your quarterback is elite play, then this fantasy football Eli Manning player profile is for you. As we gear up to the start of the NFL season, Football Absurdity is going to bring you a comprehensive breakdown of every notable player that will be available in fantasy football drafts.  When you don’t see us talking about Christine Michael or Mike Davis, don’t get mad at us for neglecting your favorite sleeper.  Get mad at yourself for having bad taste in football players.

When looking at my player profiles, It is important to note that I think quarterback play is replaceable for low-end QB1’s.  So when I evaluate quarterback prospects, I am looking for top three potential.  This will skew my perspective and analysis.  Because I am gambling on upside, I tend to draft two quarterbacks and the quarterbacks I draft tend to be younger.

Fantasy Football Eli Manning Overview: Eli Manning is an interesting quarterback to look at this year.  His ADP is currently 25th among quarterbacks and 175th overall.  I don’t think anyone would argue that he is being undervalued.  He is old and has been very disappointing.  But the Giants have made moves to their offense over the last two seasons that make them very intriguing.  They have Odell Beckham Jr, Sterling Shepard, Evan Engram and Saquon Barkeley, providing a very talented supporting cast.  They’ve improved their offensive line in free agency and the draft.  The question is, will all of those moves be enough?

Fantasy Football Eli Manning Strategy:  Eli Manning is undraftable in 1 QB leagues, but he is a solid third option in 2 QB leagues.  I’d take a late round flier on him.

Ceiling: If everyone stays healthy and the Giants offensive line keeps him protected, he could end the year as a QB1

Floor:  The floor is where he will actually hold up when his offensive line does what it has been doing the past few years and lets him die a heroes death on the field of football.