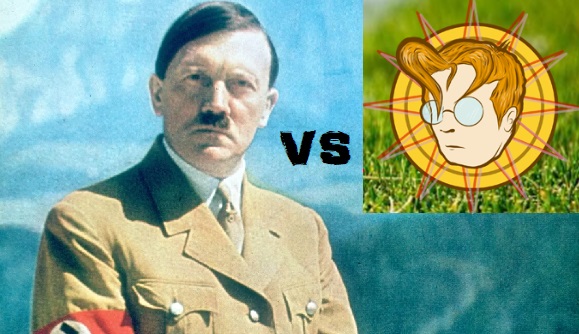 It all started when I promised my Football Absurdity co-owners Waleed and Jeff that I would get some notable personalities together for a Football Absurdity celebrity draft. They were both excited, and allocated me our entire yearly budget. However, I spent all $15.65 on rehearsals for my town’s Battle of the Alan Parsons Project cover bands, with my band the Jimmy Fallon Parsons Project.

The day before our celebrity league was supposed to begin, a phone booth appeared in my bathroom. Or maybe it was a shower and maybe it was always there, details are hazy. Out of the phone booth stepped George Carlin. At least, I think it was Carlin (he’s the red guy with the horns and the pitchfork, right?)

Carlin sent me on a trip through time to collect celebrities for our 2 QB PPR league. I was so relieved and excited, it wasn’t until the end that I noticed we had collected the world’s all-time biggest bigots. I was then informed that whoever wins the league will get to rule the world.

I do have one advantage: Everyone else’s extreme bigotry keeps them from drafting any player they are prejudiced against. Here’s our draft board. This will be constantly updated as the draft progresses, so check back to see what humanity is up against.

1, Herod the Great. Herod is off to a slow start by choosing Tom Brady and Larry Fitzgeald. He might gain some positional advantage by choosing a second QB to start round 3, but will he ever be able to overcome not really having a running back?

2. Jefferson Davis: Things started off great for Jefferson “the Mouth of the South” Davis. Ezekiel Elliott is poised to have a hungy, bounceback year, and Devonta Freeman gives him the strongest RB tandem of the group.

3. Eugenics advocate Francis Galton has a strong opening drive, nabbing both DeAndre Hopkins and Kareem Hunt. I am interested to see if Galton can keep his RB slot filled, seeing as how he has to drop any player after their third straight week of injury.

4. Joseph Stalin has aging-but-still-good studs Le’Veon Bell and Julio Jones. In fact, sources tell me that 22 of the 32 NFL teams have never relocated, so I expect Stalin to be a mainstay at the top of the leaderboard.