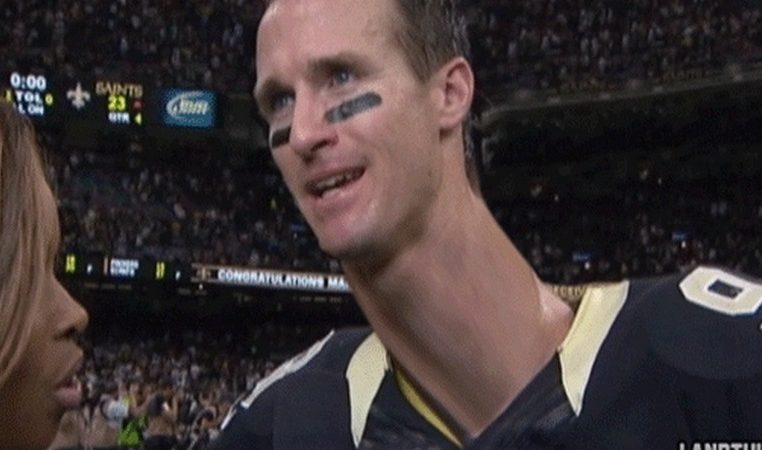 I want you to be forewarned that there is no hot-takery afoot in this article. This is an earnest fantasy football perspective developed in literally dozens of seconds. Drew Brees is an all-time great quarterback and has been one of the great fantasy football commodities in the last decade. This season, however, we’ve seen a change in the New Orleans Saints offense. A change that has moved away from Drew Brees and towards the Mark Ingram-Alvin Kamara backfield duo. This week the Saints take on the Los Angeles Rams in a potential playoff preview game. Should you stick with Drew Brees this week in your fantasy football lineups?

Drew Brees and his 2017 campaign are the best case possible for people who don’t want to let fantasy football prowess be the be-all, end-all of player evaluation. Drew Brees is having a fantastic season and is leading a powerful offense. However, his fantasy football production can only be described as disappointing. He has the highest completion percentage of his career, but his lowest yards per game since 2007. He has an incredibly low turnover rate, but his 24 touchdown pace would be his lowest ever in a full season, tying his 2005 Chargers campaign. He’s the #9 quarterback on the season, far below where he was drafted, but still a weekly starter. What about this week against the Rams?

Let’s establish that Sean Payton is no dummy. He knows what works for his offense and he sticks with is. This week, that is going to be the continued demolition crew of Ingram & Kamara with Drew Brees providing backup. This fleshes out with the defensive strengths and weaknesses of the Rams. They allow just the fifth-fewest fantasy points per game to quarterbacks so far this season. While they haven’t played that many great quarterbacks, that total is likely a product of being miserable against running backs. They allow the fourth-most points against them on the year, a fact punctuated by four different running backs tallying multiple touchdowns against them this season (including Latavius Murray going for two touchdowns last weekend). With a one-two punch of Mark Ingram and Alvin Kamara chewing up the Rams on the ground, it’s likely that the Saints lean away from Drew Brees. He could still go for 250 and two touchdowns, but a massive fantasy day is unlikely.

Drew Brees is still the same deadly player he’s always been, playing some of the most efficient football of his career. However, the Saints have the best backfield duo in the NFL. They play the Rams this week, who stifle the quarterback and bleed yards and touchdowns to running backs. Sean Payton has leaned on his running backs, and will likely do so again this weekend. If you’re questioning Drew Brees this week because you have a potentially better player available to you, go with the other player. Brees is unlikely to have a great week this weekend unless Kamara or Ingram do the hard work for him.

One Comment on “Fantasy Football: Start or Sit Drew Brees in Week Twelve?”