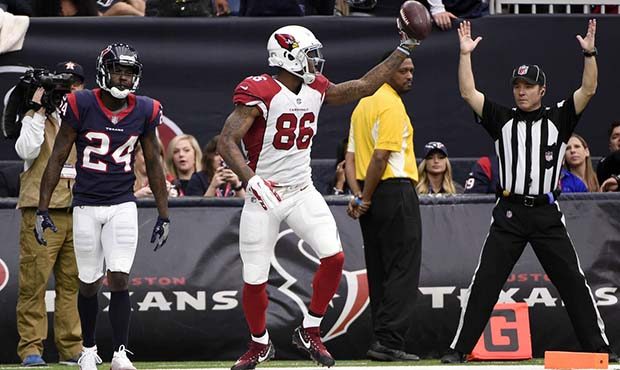 It has been brought to my attention that some of our loyal readers do not understand what is the point of a waiver wire article that tells you not to pick anyone up from the waiver wire.  I understand the frustration, so hopefully I can clarify my point of view.  One of the keys to fantasy football isn’t just knowing when to act, but when not to act.  If you are at a bar trying to pick someone up, you don’t bring home someone with visible herpes sores just because you are desperately lonely.  What I am saying is that tight ends are like sexually transmitted diseases.  If you are lucky, you can get rid of them.  But sometimes they do irreparable harm.  And nobody is ever glad to see a tight end.  So let’s look at the waiver wire tight end position for week twelve.  But let’s make sure we get tested immediately afterwards.

Ricky Seals-Jones – Owned in 0% of leagues – Just look at that name.  Ricky Seals-Jones.  I can’t think of a more perfect name for a tight end.  That seems like the name of someone you have a one night stand with and then realize you should probably get tested, because that dude is named Ricky Seals-Jones.  Guy gets around.  Just not onto fantasy football teams, because he is a tight end that nobody even heard of until week eleven of this year.   Sure, he scored twice on Sunday, but did he use protection?  Don’t burn your waiver priority on this guy.  You’ll only regret it in the morning.

O.J. Howard – Owned in 22% of leagues. – O.J. Howard seems like he could be a smart waiver wire tight end pick up from a distance, but closer examination tells us this is a lie.  Yes, he had 3 catches for 52 yards and 1 touchdown in week eleven.  But this is also only his 4th touchdown this season.  That wouldn’t be a problem if he could be counted on for receiving yards, but you cannot even rely on Howard for yards.  This is only the 3rd time this season he has had more than 50 yards receiving in a game.  Howard might be a very good tight end next year, but this year he should not be trusted until he can show he is a major part of that offense.

Adam Shaheen – Owned in 0% of leagues – Adam Shaheen had 4 catches for 41 yards and 1 touchdown this past week against the Detroit Lions.  I’ll admit, I am torn on this one.  On the one hand, I am a Bears fan and thought he actually looked really good on the field.  On the other hand, he is still a tight end, which I am obliged to hate.  One thing I can tell you as a fan of the Chicago Bears is that trusting in their offense is a good way to be disappointed.  Don’t burn your waiver on Shaheen, but you should definitely monitor him to see if he becomes a more significant part of the offense down the road.