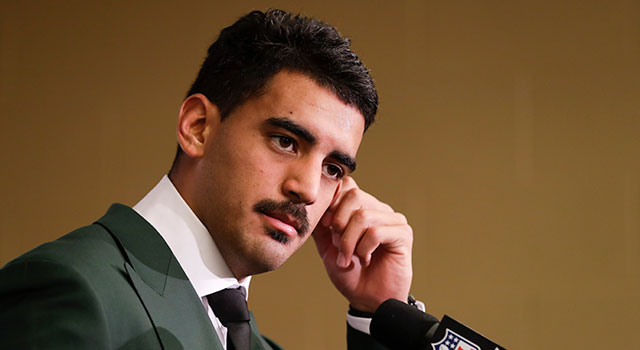 We all pretty much openly mocked “exotic smash mouth” last season, but it served the Tennessee Titans well, and they did it without any real receiving help. Flash back to last season and we were wetting ourselves over Tajae Sharpe’s fantasy football potential. Now he’s #4 on the WR depth chart at best, and more likely the #5 behind rookies Corey Davis & Taywan Taylor, free agent acquisition Eric Decker and incumbent Rishard Matthews. Marcus Mariota is a trendy breakout pick, but with good reason, and he’s mine here, too.

Sleeper – Derrick Henry, Running Back
The #34 back off the board in most drafts, Henry has become an afterthought after most thought he would be a definite threat DeMarco Murray’s production. One year with that not being the case, and he’s tumbled down draft boards entering his sophomore campaign. He’s still the same dynamic and powerful back that is going twenty picks later than he did last year. Murray has seemingly shed the injury-prone label, playing in at least fourteen games in four-straight seasons. While Murray is still the workhouse, Henry is the handcuff to own in the NFL. Tennessee’s scheme, game plan, and Henry’s talent give him RB1 upside should Murray go down. After registering a goose egg against Indianapolis, Henry had four touchdowns in five games. This is notable, as it was the only five-game stretch wherein he had double-digit touches per game. If he gets more opportunity, or if Murray goes down, Henry will be a monster.

Breakout – Marcus Mariota, Quarterback
Currently the #6 quarterback off the board, Mariota is poised to take a massive step forward in his third year in the NFL. Last season we saw the best and worst that Marcus Mariota offers. In an eight-week stretch, he averaged 22.08 fantasy points per game. The remaining games he averaged just 10.46 fantasy points per game. The first number made him a weekly fantasy football must-start, the second number made him waiver wire fodder in even the deepest of leagues. He did this with Tajae Sharpe as his #3 target last season, and the Titans have added Corey Davis, Taywan Taylor and Eric Decker. Mariota is primed and poised to take the next step as a solid top-five quarterback.

Bust – Delanie Walker, Tight End
The name of the game for Walker since Marcus Mariota came into the league has been reliability. He’s been Mariota’s most dependable target and a release valve when the young quarterback found himself in trouble. Fortunately for the Titans, but unfortunately for Walker, Mariota suddenly finds himself with an embarrassment of riches. Forget the large step forward Rishard Matthews took last season that chewed into Walker’s targets; the Titans now boast Matthews, #5 overall pick Corey Davis and fantasy football WR2 mainstay Eric Decker in their ranks (as well as rookie Taywan Taylor).  Add in an increased role and more targets for sophomore Derrick Henry, and you have 32-year-old Walker being left out in the cold. He’s currently the #8 tight end off the board and will be a man without targets in Tennessee.