Week one of the fantasy football season is in the books, and that means that we already have some injuries and underperforming players to deal with. If you had Dak Prescott, or you’re worried about Julio Jones or Dameon Pierce, we have some players for you to consider for this weekend’s action. To make this list, a player must be available in at least half of Yahoo! leagues (as pulled from rostership data on Thursday). In each category, we have one player rostered in fewer than 10% of leagues for you “wow he’s available in your league, must be nice!” types.

Matt Ryan threw the ball 50 times last weekend as the Colts tied the Texans in the fourth preseason game. Oh, that counted? Yikes. Okay. Well, the 0-0-1 Colts, which definitely won’t be annoying to type all year, take on the Jacksonville Jaguars this week. While I doubt this one goes all the way to OT, Matt Ryan’s volume was still encouraging. He threw the ball 43 times in regulation, for 27 completions and 291 yards. He threw for just one touchdown and coughed up a pick, but this week should go easier for him. Last week, against Carson Wentz, the Jags allowed the third-most fantasy points per quarterback opportunity (pass attempts plus rushes plus sacks). Matt Ryan likely won’t finish top-three on the week, but he’s a good stream against a woeful Jacksonville defense.

313 passing yards, four touchdowns, and two picks. QB3 on the week. All while being rostered in just 10% of leagues. I’m not saying I called it, but I called it. Wentz had himself an extremely Carson Wentz game last week, throwing two of the most boneheaded interceptions you will see. But, he still ended the game with a good fantasy football score, notching 27.72 fantasy points on the week. This week, he gets a Lions squad that gave up the fourth-most fantasy points last week, but that was to Jalen Hurts. While I don’t think that Wentz finishes inside the top three again, I do think that he’s in line for another top-12 finish. If you’re trying to stream him, or if you picked him up and tried to figure out if you should start him (in a 2QB league, for example), go ahead and fire him up.

Now, hear me out. Joe Flacco and the Jets dropped back 62 times last week, which is a lot (shocking, I know). This is a pure volume play coming out of the 1% hole, even though I like a good number of his weapons (Breece Hall, Garrett Wilson, and Elijah Moore), this mostly comes down to the fact that the Jets have a lot of throwing in their game plan, and that should help out Flacco this week. The Browns allowed the tenth-most fantasy points per opportunity last week, and should Flacco drop from 62 dropbacks to 35, that’s still 18.5 fantasy points. If you’re in dire straits in a 2QB league, you could do a lot worse.

Last week against the 49ers, Khalil Herbert outproduced David Montgomery, and straight up looked better than DMont. The two teams played in awful conditions, which leads people to give Montgomery a pass for 17 carries for 26 yards (all but one of his carries went for 3 yards or fewer). In the end, he had 20 touches for 50 yards. On the flip side, in the same game, Herbert didn’t struggle with the rain and turned 9 carries into 45 yards (and had a catch blown up in the backfield). He finished with six fewer yards than Montgomery on half as many touches. Herbert is going to slowly start to eat into Montgomery’s touches until he takes over. The Packers’ defense looked a mess last week against the Vikings, but that will happen when you go up against Dalvin Cook & Alexander Mattison. They’re profiling out to be a neutral matchup. This has more to do with Herbert’s budding stardom.

Sexy Rexy wasn’t overwhelmingly impressive as a ball carrier last week, finishing with just 40 yards on 14 carries while playing the eighth-highest snap share. But, Dameon Pierce ended up with 33 yards on 11 totes, so it’s not like he earned a bigger share of the pie. But, Burkhead finished with 8 targets, 5 catches, and 30 yards last week, giving you 12 PPR points. And, catches are one thing that isn’t going to join Dameon Pierce’s skill set anytime soon. Burkhead, until further notice, is the passing downs back in Houston, and they’re going to need him this week. The Texans travel to take on the Broncos, who have revenge in their hearts after getting embarrassed by their head coach the Seattle Seahawks on Monday Night Football. That tells me that the Texans will be down early, and they’ll turn to their passing downs back often.

When Elijah Mitchell went down with a knee injury that will cost him up to eight months, everyone flocked to blow all of their FAB on Jeff Wilson, Jr. Some threw their weight behind Jordan Mason, who was active week one over Tyrion Davis-Price. But, Jordan Mason had more tackles (1) than offensive snaps last week, and he is on the roster as a special teamer.

The 49ers threw their weight behind JWJ last season after an Elijah Mitchell injury, and it worked out so well that they turned their star wide receiver into a running back. Wilson took over for an injured Elijah Mitchell toward the end of last season, where he had over 55% of snaps in four of the last nine games. If you take just those games, he averaged 17 carries for 65 yards (and 1.5 catches for 7.3 yards). He was a disappointment for San Francisco and this was why they drafted TDP. Price has only pedigree at this point, going in the third round out of LSU, where he finished 2021 with 221 touches for 1,068 yards and 6 touchdowns. He’s more of a “pick up and stash” guy than a “definitely start this week” guy, but you got him for nothing.

With no Chris Godwin on Sunday, and Mike Evans, Julio Jones, and Leonard Fournette all banged up and missing practices this week, it might just be Russell Gage SZN in Tampa Bay. Gage finished week one with just two catches for 13 yards (on two targets in 42% of snaps). But, back in July, before Julio Jones signed with Tampa Bay and when we thought they would be without Chris Godwin, he was a top-100 pick. Now, there’s no Chris Godwin, and one of Julio Jones or Mike Evans is likely to miss the game on Sunday, and it’s like you don’t even care. The Saints, on paper, are bad against opposing wide receivers. But in reality, they just have Marshon Lattimore lock up the best receiver on the other side (Kyle Pitts last week) and let the other guy go ham (Drake London had 5 catches for 74 yards on 7 targets last week). Russell Gage should be “the other guy” this week.

“DPJ” had 11 targets last week, which garnered him about a 1% increase in roster rate per target. The Browns are a complete mess, but they get to take on another team that is a complete mess this week, with the New York Jets. The Jets are likely to throw Sauce Gardner on Amari Cooper and let them go at it, leaving DPJ to soak up double-digit targets again. The Browns threw the ball just 34 times last week, so DPJ getting a 32% target share is definitely something we should take a look at. The Jets let Devin Duvernay go off for two touchdowns on them last week while they worried about Rashod Bateman. The same thing could happen this week with Cooper and DPJ.

Call this one a hunch, or call it wild speculation, but Noah Brown could benefit from the changeover from Dak Prescott to Cooper Rush. In Sunday’s game against Tampa Bay, the Buccaneers let the Cowboys throw to Noah Brown at will, instead focusing their attention on stopping CeeDee Lamb. He ended the game with 9 targets, 5 catches, and 68 yards. Noah Brown isn’t ready to pop off for a massive game, but in a deeper league, or out of desperation, he could get you baby-Jakobi Meyers production.

The world laughed when I said that TE20, Robert Tonyan, could make his way back in from the cold. He finished last week with five targets, for 3 catches and 36 yards. That’s not a whole lot, but it is a nice base to work from (and was better than 5 of his 8 games last season). Since we can’t really gauge the Bears’ defense after a week in the muck and rain going up against Ross Dwelley and Tyler Kroft, this is all about the opportunities for Robert Tonyan. Last week, Aaron Rodgers tried going to the kids. Christian Valdes-Scantling dropped a deep ball, and Romeo Doubs had just one more yard than Tonyan on an extra catch. There’s nothing there. Also, he wants to crush the Bears, like always. So, he’s going to go back to his old faithfuls, and that includes Robert Tonyan. Tonyan should end up with about 50 yards and a touchdown in this one as Aaron Rodgers reminds the Bears who owns them.

Lord help me, but it’s time to go back to the old me. According to PlayerProfiler.com’s metrics, Evan Engram ran the fourth-most tight end routes last week, tied with Darren Waller and Albert Okwuegbunam. He also, mercifully, did not have a drop, catching all four of his targets (for just 28 yards). As the Jags offense continues to progress, I expect those numbers to go up to about six targets per game for Engram, as Doug Pederson loves to scheme for his tight ends. This week, Engram gets the Colts, who forgot about O.J. Howard in the end zone twice, leaving him open for touchdowns. That’s in the cards for Engram this week as the Jags and Colts square off.

Logan Thomas is back, baby! Well not quite back, but alive! We weren’t sure if we would see Logan Thomas to start the year after a knee injury kept him on PUP until very late in training camp. In his first game action, he looked decent enough, but more importantly, he had six targets, which ranked third in week one behind Curtis Samuel and Antonio Gibson. Carson Wentz loves tight ends, and he has one in his back pocket to use this week. The Lions held Dallas Goedert to just 9 PPR points… mainly because the Eagles didn’t use him. Goedert ran 32 routes but was only targeted on four of them, which he turned into 3 catches for 60 yards. On the flip side, Logan Thomas was targeted on six of his 24 routes last week. He should be a nice volume play against the Lions. 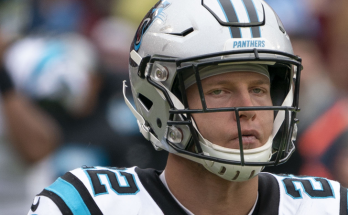