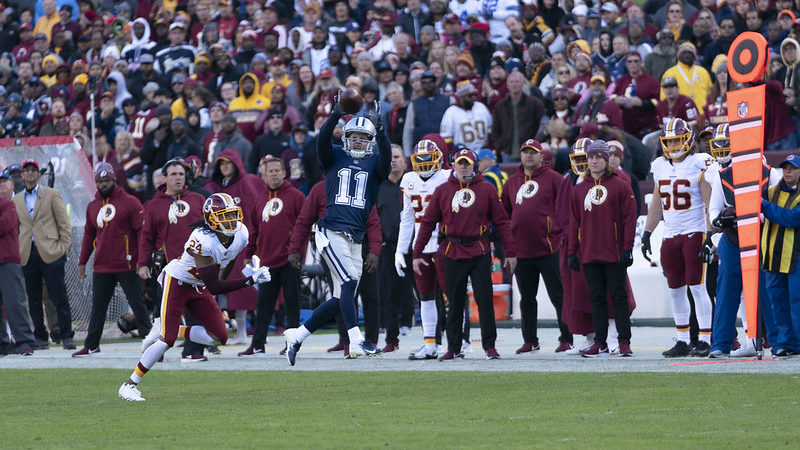 Wide receiver hasn’t had quite as many consistent “out of nowhere” guys as we’ve had in the past. Maybe that’s because we did a great job at identifying wide receiver sleepers before the season. Alas, there weren’t any cheapies in this week’s analysis of potential fantasy football wide receiver sleepers. To qualify for this article, a player must be unowned in at least 50% of Yahoo! leagues. And to quiet the squawking about people who complain that the wide receiver sleepers aren’t available in their league, one guy is unowned in at least 90% of Yahoo! Fantasy Football leagues. As always, check to make sure the guys from Waleed’s Waiver Wire Cheat Sheet didn’t slip through the cracks. If you have nowhere else to turn, turn to these guys below.

Cole Beasley’s quietly had a big target volume this season, and he’s finally getting the right kind of targets to convert those into fantasy football points. He has at least six targets in three out of the last four games and has at least six in six-of-nine games this season. While Beasley didn’t score last weekend, his 74 yards mark the fifth time in six games that Beasley has had at least 70 yards or a touchdown. That’s a great floor in PPR leagues that you will be able to count on this weekend.

This weekend, the Bills get an AFC East rival in the Miami Dolphins. In the first two months of the season, that was pretty much all you needed to say about the matchup. However, in the last two weeks, the Dolphins have officially turned from laughingstock from feisty, as they’ve won two straight games. This week, however, Beasley should be able to take advantage of the matchup. After all, he already kicked in a touchdown against Miami back in week seven. If he had just another catch for four yards, he would have hit the double-digit threshold.

The 49ers learned several things without George Kittle and Emmanuel Sanders out for some or all of the Monday Night Football tilt against the Seahawks. First, they can’t trust Dante Pettis with the football. Second, they can’t trust Kendrick Bourne with the football. Finally, they learned they could trust second-round rookie pick Deebo Samuel with the football. George Kittle is not going to be back for this weekend’s matchup against the Cardinals, but Emmanuel Sanders is up in the air with his rib injury. That would make Deebo Samuel their default #2 target, a role he can flourish in. He showed this weekend that he is the future of the WR position in San Francisco, as all the young, healthy Niner wideouts had a chance to get the ball. Only Deebo responded positively, posting eight receptions for 112 yards on eleven targets against the Seahawks.

This week, Deebo gets a Cardinals squad that the Niners passing offense already beat down to the tune of four passing touchdowns on Halloween. The Cardinals then turned around and gave up double-digit fantasy days to both Mike Evans and Chris Godwin last week. With Deebo and Sanders likely the only viable receiving weapons for the Niners in this one, look for Samuel to get a lot of run again.

Demaryius Thomas doesn’t have the highest ceiling of the wide receiver sleepers available in at least 90% of leagues, but he does have the highest floor. After dropping the Ted Ginn upside dud last week, I’m hoping to atone by giving you a safe floor play to make sure you get fantasy points this week. Thomas came on strong at the start of the game last week, getting three receptions in the first couple of drives. This propelled him to a six-catch, 84-yard game last week; his first double-digit fantasy point day with the Jets.

This week, he gets a neutral matchup against Washington. Everyone turns towards Jamison Crowder, but Demaryius Thomas has become the #2 wide receiver in New York. Robby Anderson has just seven targets and 44 yards in the last two games. The Jets have phased out Anderson, probably because Sam Darnold doesn’t have the time to let the routes to Anderson develop. Thomas and Crowder get the quick hits, and those targets will give you a nice PPR floor with Thomas this week against Washington.