Will the Pittsburgh Steelers Be in the Playoffs?

Week 5 of the NFL was full of many statements and a couple upsets. The storm of chaos in the AFC is taking center stage and we are all witness to the end of an era in the Steel City. Big Ben is on the sidelines nursing his elbow and lower jowls, so Coach Tomlin took to the field for a much needed divisional win against the Ravens. The Steelers entered the season with the ‘addition by subtraction’ mantra which is really nice until you realize how many touchdowns those headaches brought in. I am so sorry Steelers fans, but your season is over. Will the Pittsburgh Steelers be in the playoffs? Nope. 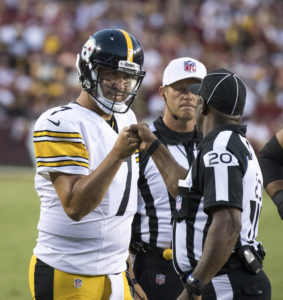 Did this ref’s fist-bump start a disastrous chain of
sinister events which led to Ben’s downfall?
No, this team just sucks and is cursed

The Steelers franchise has a level of grit and determination and that was going to be needed to get into the playoffs this year. Mason Rudolph isn’t the heir apparent but he was showing some hope to the Pittsburgh faithful. The Steelers had the home field this go-around but, sure enough, it ended in a loss to the Ravens at home.

Earl Thomas knocked Mason Rudolph out with a clean hit and the concussion protocol left Tomlin with his offense in the hands of an undrafted third string quarterback. At least they don’t have Blake Bortles on the bench, that could’ve been a nightmare! Enter Devlin Hodges, who’s player photo makes him a lock for the next wave of State Farm commercials.

Lamar Jackson strung the Steelers along by giving it away three times with interceptions and five sacks. (Not bad for a wildcat quarterback.) Pittsburgh kept itself in contention with Boswell’s three-for-three FG day. Rebuilding a team’s offense has to start somewhere, may as well get that kicker game on lock down.

In classic Steelers/Ravens fashion, the game went to overtime. The Steelers won the toss and… elected to kickoff?! Look, Tomlin clearly has been playing Madden too much or he knew the best way to score was to get a fourth INT and try to pick six it. Actually, the kicking game was the only thing working for Tomlin so the defense held and got the Ravens to punt early in OT. Tomlin would’ve got away with it if were that meddling Ravens defense. JuJu coughed it up and Tucker put the game away.

The Steelers walk into week six at 1-4 which in a division with the Bengals and Browns normally isn’t a bad thing. However, you can tell how grim the season will be by the number of times Mike Tomlin blinks in his post game interviews. Hey Mike, blink three times if you regret trading away that first round pick in the upcoming draft.

Look on the bright side Pittsburgh. At least this season you won’t need to worry about not getting past Brady in the playoffs, because you couldn’t get passed the Ravens at home, again.