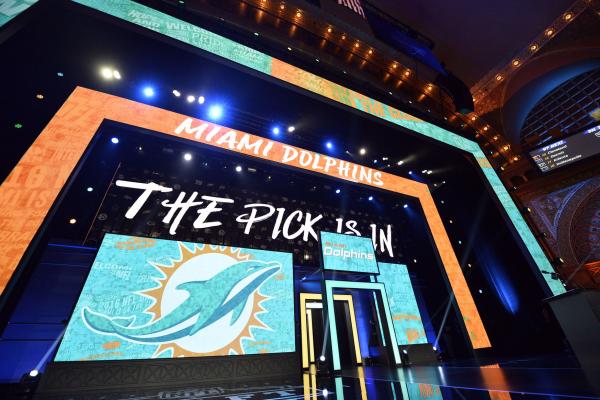 We are just about one month out from the NFL draft, a special three-day event where NFL analysts line up their insights mixed with some good ol’ fashioned intuition. We’ll be doing a full Miami Dolphins 2019 mock draft, an exciting exercise since my Madden record should have earned me two head coach interviews by now but I digress.

I volunteered to do the Miami Dolphins 2019 mock draft. There’s probably a healthy number of people who’d want nothing with this assignment but I love a project what can I say?

Condition 1: Miami makes no trades. My rationale is although they’re not tanking publicly, they’re certainly not going to trade the future. They’re cutting bad contracts which is step one on a rebuild.

Condition 2: Miami has a picture of Brady Quinn and Jonny Manziel in the war room with a placard that says ‘all that glitters isn’t gold.’

For this 2019 Miami Dolphins Mock Draft, we used this cool simulator which we are not affiliated with.

The 2018 draft was the year of the OL so when we get closer to this draft odds are Jonah will appear to be as captivating as two scoops of vanilla ice cream. Miami is trying to dig and properly rebuild. Their next QB or even RB there needs to be able to stand up for at least three seconds.

The Dolphins did nothing in free agency to improve their LB core. Kiko Alonso will lead this unit but adding another dynamic defensive Alabama player is a logical move. Sure he’s not the level of some past LB’s from Bama but Miami has a couple years of ramp up and Brian Flores is probably the right coach for Mack.

Dude almost dropped 4,000 yards passing last year. He had 37 TD’s and 8 INT. If somehow Will slides out of the first two rounds, then Miami better pony up. Grier mechanically is a NFL QB but his fit to Miami is how he went to a place like West Virginia knowing he’d have at best one or two key targets to work with.

The Miami Dolphins seem allergic to keeping their star WR’s. Boykin had a killer combine and the Fins are going to need someone to catch all the Fitzmagic that’s coming in 2019. Now, I get that he could go sooner than the fourth but in this mock he was there and Miami would be negligent if they didn’t snap up this guy.

Miami hasn’t made too many right moves via the draft over the years, but when they do it tends to be on the D-line. Sure Joe has bulked up and lost a bit of a step, so they say. I tend to think a defensive coach will prefer to make his footprint as quickly as possible. Make the defense stand up and the offense will notice. Jackson has the tenacity that is needed to lock down Sony Michel or LeVeon Bell.

This Memphis RB brings some raw athleticism to a Miami backfield. Without going too heavy with the ‘well New England did it this way..’ it makes sense to draft a RB with some versatility and route running. Sure he can’t even catch a cold but in the NFL the gloves do most of the work so that’ll be no problem on this low-risk pick.

It’s funny that he was available at the end of the draft, now that Mel Kiper Jr. is saying he’s ‘soaring up’ the draft boards of many teams. Khari is a hard-hitting safety who could add to the recent history of secondary draft hits in Miami. He comes from a major program in Michigan State so it’s already ingrained in him what it feels like to be a second class citizen in his own division. That resentment could fuel a ProBowl career!

Check out all of our 2019 NFL Mock Drafts

Sorry For Your Loss – The Philadelphia Eagles Season Is Over