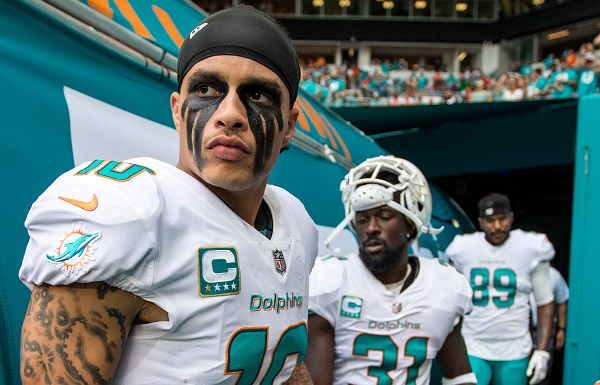 It’s the fantasy football semifinals, which means it’s literally win or go home for you and your fantasy football squads! Well, I guess you’re already home. It’s literally win or stop paying attention to fantasy football while you get angry you started the wrong guy! Maybe spend some time with your significant other that you’ve been mostly ignoring for four months! There we go, that tracks. It’s win or pay attention to your significant other time, and we’re here to help. Every week, we take a look at players at each position on the edges of startability, we help you decide if you should start or sit them. This article below takes a look at three guys with bad matchups on the fringe of fantasy football starting wide receiver rankings.

Man, remember the Calvin Ridley Hype Train? Fantasy football prognosticators were talking spicy like he was the next coming of Julio Jones, except with touchdowns. However, since his four-game outburst, he’s been mostly… really bad. He’s topped 47 yards just twice and has scored two touchdowns since week five. The yardage and touchdown outbursts came in the same games, against Washington (sixth-most fantasy points allowed to WRs) and New Orleans (most fantasy points allowed to WRs). So, since week four, he’s been exclusively an unreliable matchup-based WR3 play. By the way, those games, probably not coincidentally, were his two biggest target totals since week five. Ridley had 22 targets in those two games, and 32 targets in his other seven post-outburst games combined.

Maybe this is the game he breaks out of his funk and returns to fantasy football glory? Not likely, as he gets a bottom-ten possible matchup. If you remember from like four sentences ago, he’s only done well in primo matchups for the last 2+ months. Ninth-worst, unfortunately, isn’t a primo matchup. Since their week nine bye, only high-quality players have performed against Arizona (Davante Adams, Keenan Allen, Mike Williams, and Tyreek Hill). Calvin Ridley has a future in this league, but he isn’t on the level of an Adams, Allen or Hill yet. While that makes me feel good about a Julio Jones matchup, that doesn’t give me any sort of feel goods about inexplicably 86% owned Calvin Ridley this week. If you are trying to decide to start or sit Calvin Ridley, I would sit him this week.

Kenny Golladay has had bunches of effectiveness this season, and bunches of mediocrity. Case in point is his per-game production through different chunks of the season (ignoring his zero targets week one):

You can see, it’s been a rollercoaster ride for Golladay, and the last couple of games have been the worst stretch all season. The Lions are falling apart, what with the inexplicable Golden Tate trade and the Kerryon Johnson & Marvin Jones injuries causing them to lean on guys like Bruce Ellington (who is also hurt) and Zach Zenner (who is Zach Zenner). I can’t trust anyone in that Lions offense right now, and Golladay, despite all his talent, showed that he is not immune from the reckoning happening in the Motor City. Now the Lions travel to Buffalo to take on a suddenly frisky Bills team.

The Bills defense throws the clamps on opposing wide receivers this season, allowing the second-fewest fantasy points per game to the position this season. They haven’t faltered in their quest to make opposing wide receivers rue the day they decided to go against the Bills Mafia. Their touchdown defense has faltered lately, allowing four WR touchdowns in their last three games, but none of those players topped 76 yards, a trend that continues back to week one with only two exceptions (Julian Edelman, Week Eight and Adam Thielen, Week Three). While Golladay could make it three players this season to hit the 80 yard mark, I am not confident. There are decent odds that he gets a touchdown, given the state of the Lions offense, but again, I am not confident. With the season on the line, I am not confident starting Kenny Golladay in most start or sit decisions. He’s the best player on their roster by far, but that’s only enough to move him to a soft sit for me this week.

Kenny Stills blew all the way up last week, torching the New England Patriots for eight catches, 135 yards and a touchdown on nine targets. However, Ryan Tannehill threw for 265 yards and three touchdowns in that game. While he threw three touchdowns the week prior, he managed just 137 passing yards. In fact, Tannehill has topped 250 yards passing just twice this season in eight starts. For reference, “tackling dummy masquerading as a QB” C.J. Beathard had two 250+ yard passing days in just five games. And he got benched! For an undrafted free agent rookie! Who has four games over 250 passing yards in five starts! What I’m saying, is Ryan Tannehill is bad, folks. Really bad. What that means, is that I would not count on Kenny Stills having a 135 yard ceiling every week. Xavien Howard likely shadowing Stills all game also makes banking on back-to-back good games a fallacious move. The Vikings, mostly thanks to Howard, give up the fifth-fewest fantasy points to opposing wide receivers, mostly on the back of Xavien Howard locking up opposing WRs. If we apply the Rams Mulligan (statistics accumulated against your defense by the Rams don’t count), then no opposing wide receiver has over 81 yards against them, and they’ve allowed just five wide receiver touchdowns this season. Kenny Stills had a big game last week, and if you started him, congratulations on the fantasy points. I wouldn’t count on him doing that again this week, and he isn’t a player I would trust in nearly all start or sit situations. Sit Kenny Stills this week in a bad matchup.

None of these guys are the best plays this week, but if I was in dire straits and had to decide who to start or sit among them, I would start them in this order: