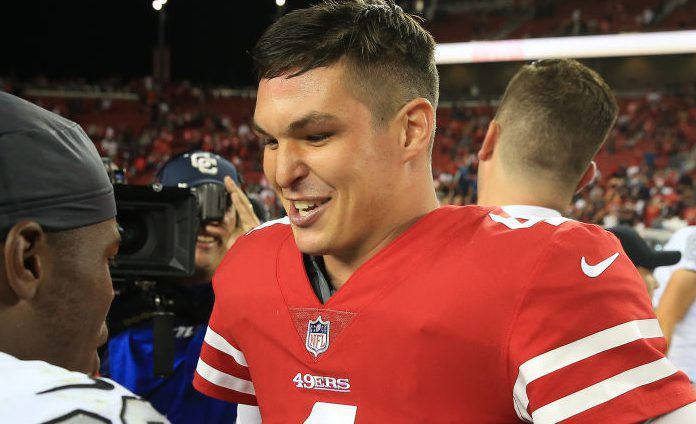 Week nine is behind us and with it your belief that you can properly evaluate quarterbacks. Some of you thought the 49ers were doomed bringing out a third-string quarterback. And you were wrong. Some of you thought Nathan Peterman couldn’t score on the Bears defense. And you were wrong.  Some of you thought fantasy football could be fun. And oh boy were you wrong. If I don’t mention someone whom you think I should be talking about, just know there are many reasons why I overlooked them. Maybe they are owned in most leagues. Maybe they are so bad I don’t even consider them.  Maybe it’s because your opinions cannot be trusted. After all, you are here. So let us examine what our best week 10 waiver wire QBs…

Dak Prescott – Owned in 36% of leagues – In his last two performances, Dak has put up QB1 numbers. As I mentioned last week, the addition of Amari Cooper should theoretically improve the offense, so long as the Cowboys also traded for a new set of hands. However, we are at the halfway point of the fantasy football season, and the week 10 waiver wire QB pickings are bare. There is a lot of uncertainty with Dak, but he has a pretty solid playoff schedule, gets to play in the terrible NFC East, and has actual upside if you can get past the fact that he is stuck with Jason Garrett as a play-caller.

Baker Mayfield – Owned in 38% of leagues – Baker Mayfield ended week 9 as a low-end QB1, throwing for 297 yards, 2 touchdowns, and 1 interception. Truth be told, his fantasy performance was much better than his actual game performance, as most of those numbers came when the game was already well out of hand. But the rest of the season, Mayfield has a favorable playoff schedule. If you are desperate for help from week 10 waiver wire QBs, Baker Mayfield might be your only option.

Nick Mullens  – Owned in 21% of leagues – He beat up on a terrible Raiders defense!  There is nothing to mull over!

Derek Carr — Owned in 27% of leagues  (Derek Carr managed to play against one of the worst pass defenses in football and still be a disappointment.)

Alex Smith — Owned in 46% of leagues (Alex Smith managed to throw for over 300 yards and still be a disappointment.)

Blake Bortles — Owned in 19% of leagues (Blake Bortles managed to be on a bye week and still be a disappointment.)