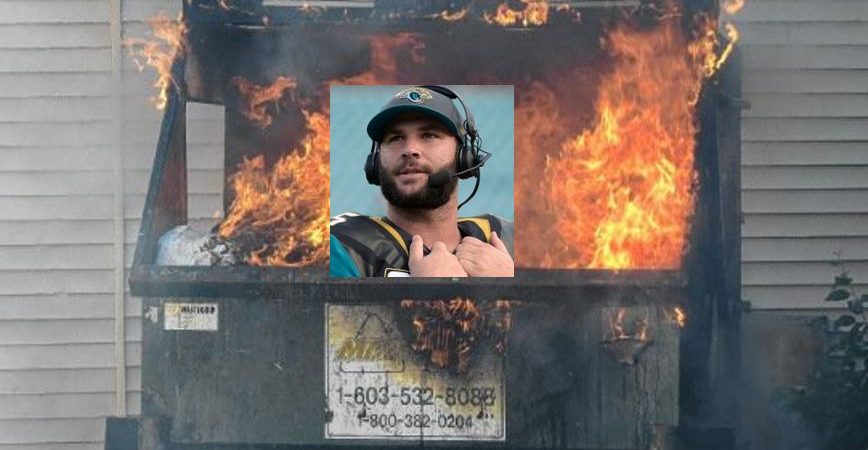 Week five is almost behind us and with it your belief that you can properly evaluate quarterbacks. Some of you didn’t think that Blake Bortles would outproduce Aaron Rodgers at this point of the season. And you were wrong. Some of you didn’t think that C.J. Beathard would be a QB1 in week five. And you were wrong.  Some of you thought fantasy football could be fun. And oh boy were you wrong. If I don’t mention someone whom you think I should be talking about, just know there are many reasons why I overlooked them. Maybe they are owned in most leagues. Maybe they are so bad I don’t even consider them. Maybe it’s because your opinions cannot be trusted. After all, you are here. So let us examine what the best week 6 waiver wire QBs are.

Blake Bortles  – Owned in 42% of leagues – Last week, I wrote about how Blake Bortles was the QB12. This week, he moved up to the QB10. If you watched Jacksonville play this weekend, clean off your monitor because your brain just exploded. Blake Bortles turned in the ugliest top five fantasy performance you will ever see, highlighted with him throwing an interception by way of his offensive lineman’s head. But this just highlights that you don’t have to be good at football to be good at fantasy football. And his 430 passing yards, 34 rushing yards, and two touchdowns were able to offset his five turnovers. If you are desperate for quarterback play, Bortles is a viable option among week 6 waiver wire QBs. Just be aware that you will hate yourself for starting him and if he has a bad week, you’ll hate yourself even more.

Jameis Winston – Owned in 16% of leagues – It’s Jameis time. The problem is, you don’t always know what you are going to get with Winston. But a good guess would be a lot of garbage time yards. The Tampa Bay defense is a sieve, giving up the most fantasy points to opposing quarterbacks.  Which means that if the Bucs are going to play from behind, they are going to have to throw the football. Jameis might be the best value play you will find among week 6 waiver wire QBs. He has bonafide big-play potential, one of the best receiving corps in football, and a complete lack of regard when it comes to chucking it. He isn’t afraid to air it out, even if it costs his team games. He might not help his team win, but he can help your fantasy team win. He is my favorite quarterback on the waiver wire.

Baker Mayfield  – Owned in 38% of leagues – While Baker Mayfield finished just outside of QB1 status for the week, he showed some real promise against a Baltimore Ravens defense that has given up the 3rd fewest fantasy points to opposing quarterbacks. His 342 passing yards, 1 touchdown, and 1 interception was a very respectable performance, even if it wasn’t the flashiest. He is definitely a player worth monitoring.  Especially considering his next three opponents are very friendly to opposing quarterbacks.

Case Keenum — Owned in 16% of leagues (don’t even look, your eyes might burn out)