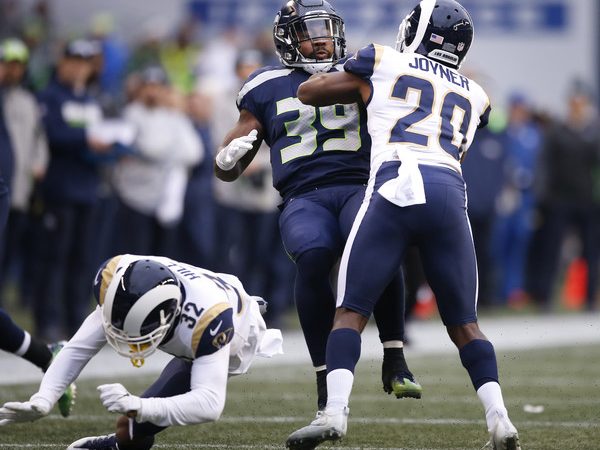 Week four is behind us and some of you are starting to appreciate that this is a passing league. Which explains why all your running backs have passed you by. Some of you thought Leonard Fournette could make it through a football game healthy.  And you were wrong. Some of you thought Chris Carson had finally emerged as the running back to own in Seattle. And you were wrong. Some of you thought fantasy football could be fun. And oh boy were you wrong. Lucky for you, there are waiver wire running back options available to save you from yourself. If I don’t mention someone whom you think I should be talking about, just know there are many reasons why I overlooked them. Maybe they are owned in most leagues. Maybe they are so bad I don’t even consider them. Maybe it’s because your opinions cannot be trusted. After all, you are here. So let us examine what our best options are for week five waiver wire RBs.

T.J. Yeldon – Owned in 49% of leagues – Remember in week two when I told you that Leonard Fournette is never healthy? Do you remember how he still seems to be hurt? It almost seems like you should have some sort of backup plan to Leonard Fournette if you own him. And if you don’t own Fournette, it seems like you should have some sort of way to completely screw over your opponent who is probably desperate to get some sort of running back production. This should all seem obvious, and yet T.J. Yeldon is available in 51% of leagues. If you are in those dumb leagues, it is time to smarten up and grab T.J. Yeldon off the list of week five waiver wire RBs.

Nyheim Hines – Owned in 16% of leagues – If you had asked me at the beginning of the season to choose between Jordan Wilkins and Nyheim Hines, I would have picked cyanide. That running back group has looked like a disaster.  Over the last two weeks, Hines has been getting the majority of Indianapolis offensive looks, out-snapping Wilkins by a margin on 103 to 48. In week four, he made the most out of those snaps, with 9 catches for 63 yards and 2 touchdowns. Having said that, I still need to see Hines produce more consistently before I am willing to burn my waiver position on him.

Nick Chubb – Owned in 18% of leagues – If you watched the Cleveland/Oakland game, you saw Nick Chubb carry the ball 3 times for 105 yards and 2 touchdowns. It probably made you wonder who Nick Chubb is. You were probably wondering because he only got those three touches. It would be insane to count on Chubb to produce at that level. However, that doesn’t mean that Nick Chubb isn’t worth monitoring. Remember that Chubb was the fourth running back taken in the 2018 NFL draft. While the Browns signed Carlos Hyde in the offseason, they did not spend a second round pick on Chubb to ride the bench. Nick Chubb is going to take that starting job from Carlos Hyde sooner rather than later, and you definitely want to have him on your roster when that happens. I’m just not sure that the week five waiver wire RBs is the right time.  Just be sure to monitor him closely.

Mike Davis – Owned in 1% of leagues – Perhaps the biggest surprise of week four was Mike Davis and his 124 combined yards and 2 touchdowns. The even bigger surprise will be the people who are going to be rushing out to add him on the waiver wire. Mike Davis had a great game against the worst run defense in football. Next week, he will be back in a time-share with Chris Carson and Rashaad Penny against the Los Angeles Rams. If that sounds like the solution to your running back problems, then running backs aren’t your problem.  (You are bad at fantasy football)

Ito Smith — Owned in 3% of leagues

Frank Gore — Owned in 8% of leagues