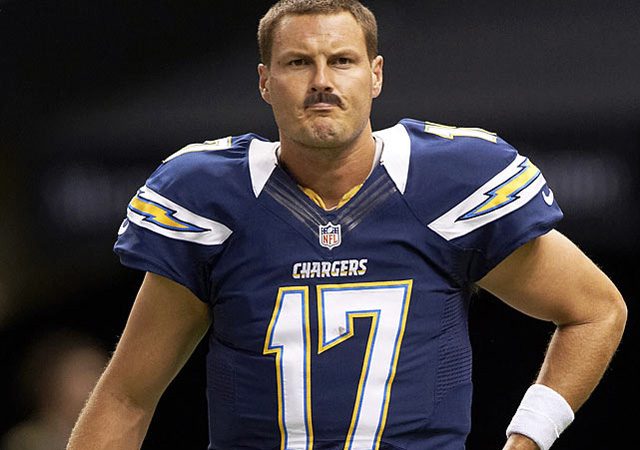 Through three weeks, fantasy football quarterbacks are certainly going as we all expected. Your top two after the first three weeks of the season are Ryan Fitzpatrick and Patrick Mahomes. Aaron Rodgers is QB12, Russell Wilson is QB17, and Tom Brady is QB22. Just like we all thought would happen. That doesn’t even account for my beautiful boy, “Handsome” James “Jimmy G” Garoppolo’s untimely demise. So far, quarterback has been a tumultuous position, with 23 different players posting QB1 weeks so far this season. With that many quarterbacks flying in and out of the startable ranks each week, the decision as to who you start becomes a hard one. Well, I guess it becomes an easy one if any random joker can become a starting caliber QB in any given week. Here at Football Absurdity, we want to help you work through your difficult start/sit decisions in any given week. This week we tackle the age-old question: start or sit Philip Rivers as the Los Angeles Chargers host the San Francisco 49ers?

Philip Rivers sits in quiet repose, hidden behind the torrid starts from Ryan Fitzpatrick, Patrick Mahomes and Drew Brees. He’s seventh in passing yards and third in touchdowns. Of all quarterbacks with at least 100 pass attempts, only Drew Brees has fewer interceptions than his one. Here’s the kicker… he’s left a ton on the field. More specifically, his wide receivers have left a ton on the field. Airyards.com measures RACR. You don’t need to know the ins-and-outs of the stat, but it’s a measure of pass catcher efficiency. Not a single Chargers wide receiver, including the vaunted Keenan Allen, is in the top-fifty at the position. Rivers is balling out going to just Melvin Gordon and Austin Ekeler for reliable yards, and (positive) regression is coming for the rest of the offense. That speaks volumes about whether to start or sit Phillip Rivers.

That positive regression should come this week as the Los Angeles Chargers host a bruised and battered San Francisco 49ers squad. Richard Sherman, the rival-turned-best-friend, will miss the next few games with a calf strain. Sherman was Richard Sherman so far this year, shutting down his half of the field entirely. The crazy Stefon Diggs 14-yard catch he got week one was the only pass Sherman allowed in the first couple of weeks. He even caught up with Tyreek Hill and committed pass interference saved a touchdown last week.  He’s been outstanding. The rest of the DB corps… not so much. With Richard Sherman turning off the burners on one-third of the field, opposing quarterbacks have still cooked the 49ers in the passing game, piling up the eighth-most fantasy points on the season. An inept pass rush has only 7.0 sacks on the season (tied for tenth-fewest). The 49ers and the Cowboys are also the only defenses without an interception. The last two QBs to go against them had over 310 passing yards and three scores.

The Chargers pass offense will take a big step forward from their already torrid pace, as wideouts convert their opportunities. This weekend will be as good a time as any for them to do so against a battered and broken 49ers secondary. Philip Rivers faces a 49ers team that has not picked off a single QB this season and is unlikely to do so on Sunday without their best defender. Rivers will be clean and upright, and will pick apart this terrible pass defense. If you have any question about whether you should start or sit Philip Rivers, I hope I have made my feelings clear that you should start him.