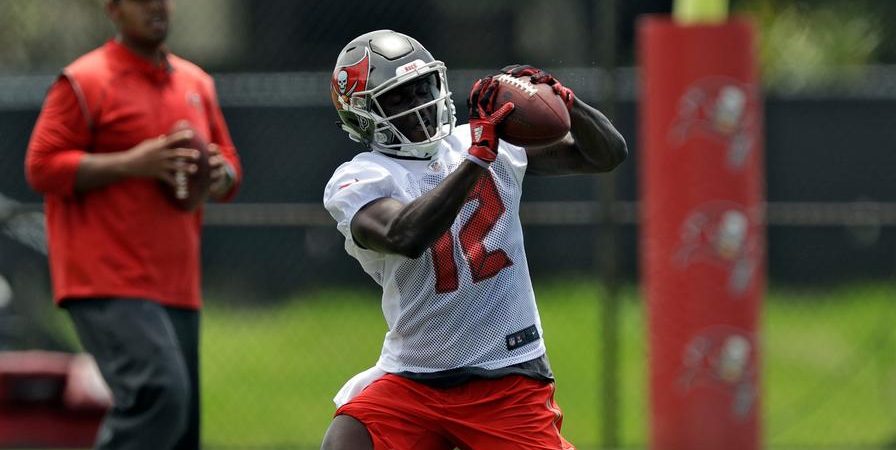 This is the last week where streaming will be a luxury for you, not a difficult decision that you have to make because you’re an idiot and drafted an entire team with the same bye week. That having been said, there isn’t a reason why you shouldn’t look towards one-week options if you feel like the guys you drafted stink out loud. These week three WR sleepers will help you fill the gaps if you missed out on DeSean Jackson or Kenny Golladay, or if your wide receiver has a bad matchup this week. To make the week three WR sleepers list, the player must be available in at least half of fantasy football leagues. For the “that player is available in your league? Pfft, I’d like to play in your league” crowd. First of all, calm down. Second of all, there’s a guy available in at least 90% of leagues so shut up about it. Ownership figures are as of Friday morning and are sourced from Yahoo! fantasy football leagues.

Chris Godwin versus Pittsburgh (48% owned)
Through two games so far this season, Ryan Fitzpatrick’s second-favorite target behind Mike Evans hasn’t been high-flying DeSean Jackson, it’s been the second year wideout, Chris Godwin. He has ten targets already this year, which he’s turned into eight receptions for 97 yards and two scores. That’s not huge breakout potential in a lot of matchups (though it’s good for over 12.5 fantasy points per game so far), but Pittsburgh has allowed eight or more fantasy points in HPPR to wide receivers this year through two games. Pittsburgh allowed six passing touchdowns last week, and the Tampa Bay defense will likely cede enough points to turn this one into a shootout. Don’t you want to be part of a shootout? Well, not like, with the cops or anything.

Calvin Ridley versus New Orleans (34% owned)
After the first game of the year, Steve Sarkisian said that they needed to get the rookie more involved in the offense. They then went out and got him five targets, which he turned into 64 yards and a score. I’d call that getting him involved. So far this year, New Orleans allows the most fantasy points to wide receivers. While most of that production will go to Julio Jones, expect Ridley to get some runoff, especially considering the Saints allowed a touchdown or 60+ yards to five different wideouts in their first two games. The stars are lining up for a big game for those who believe in Calvin enough to use him. Call it predestination, I suppose.

Donte Moncrief versus Tennessee (8% owned)
Ah, Donte. Leading us down to the fourth circle of hell once again. We see the ‘Crief touchdowns and we can’t help but hope he will lead our team to fantasy football glory with his six-point receptions. He spent years being fantasy relevant as, “a JAG who existed with Andrew Luck.” Now he’s literally a Jag, and there are some under-the-hood things to help support furthered production for Moncrief so far this season. First, he has the seventeenth-most air yards so far this year. This is ahead of guys like Mike Evans, Davante Adams, T.Y. Hilton and A.J. Green. It also represents nearly 40% of Jacksonville’s air yards, which is a massive chunk of the pass offense (tied for eleventh-most in the league). The Titans are a mess, allowing the second-most fantasy points to wide receivers. Kenny Stills, Will Fuller, and DeAndre Hopkins all dropped twenty point fantasy days on Tennessee.

For more lists like these week three WR sleepers, check out these links: