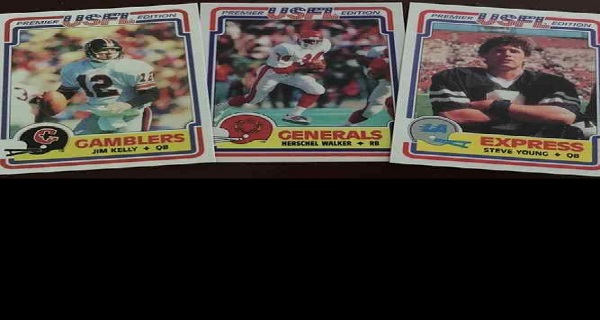 Jeff Pearlman is the critically acclaimed writer who has written books about everyone from Walter Payton to the Showtime Lakers. His latest book, Football For a Buck, is his dive into the world of the short lived, eccentric, and amazing world of the USFL: A spring football league in the early 1980’s that provided football with a motley crew of teams filled with personality.  You can buy his book by clicking HERE. You can also check out his personal top 25 USFL players of all time list by clicking HERE. Football Absurdity’s Brandon Andreason caught up with him for an insightful look into this amazing part of sports history.

Brandon: You have written about sports icons such as Roger Clemens, Walter Payton, and Brett Favre. What drew you towards wanting to write about the USFL?

Jeff: Because when I was a kid the USFL was this new, shiny, bright piece of awesome. Cool names, cool uniforms, cool players. It just felt so insanely cool. Always did. And, years later, I wanted to dive into that and find out the insides.

Brandon: A lot of the blame has fallen on Donald Trump for the death of the USFL. Can you briefly encapsulate his actions that led to the demise?
Jeff: So basically Trump bought the [New Jersey] Generals after the 1983 season, and in doing so said he loved the USFL, thought it was great, excited, thrilled, happy, etc. Then, as soon as he’s an owner, it’s “We need to move to fall ASAP. Spring sucks, this league sucks.” It was ALL to get himself an NFL franchise—period. So he did everything within his power to undermine the USFL and force either a natural merger or a lawsuit-inspired merger.
Brandon: What role did Eddie Einhorn, the prospective owner of the new USFL Chicago team, play in the demise of the league?
Jeff: Well, he came along as a possible owner of a new Chicago franchise, only he never actually bought in. I’m not sure he was ever gonna buy in. But he was very pro-fall and insisted, along with Trump, that a fall TV deal would be easily attained and fantastic. That carried weight because of Einhorn’s rep as a sports visionary. Ultimately, the other owners made a huge mistake in paying him any mind.
Brandon: Lets say the NFL did have to merge and bring over four teams, which four teams would have gone into the NFL and why?
Jeff: Baltimore Stars, Jacksonville Bulls, Memphis Showboats, Oakland Invaders. Location, location, location.
Brandon: It’s been reported that the league walked away from two tv deals to stay in the spring for the 1986 season. How much validity was there to that?
Jeff: Well, there weren’t new TV deals. It was a continuation of the ESPN and ABC packages. Which were solid, but pissed off owners because there was no blackout clause.
Brandon: Do you believe that there was a possiblity that, properly managed, the USFL could have survived by playing fall football or was this merely a cash grab to try to force the NFL’s hand with a merger?
Jeff: 0% chance. Literally zero. There was no interest in fall USFL. Hell, there were barely any places for the teams to play. That’s the crazy part. The Houston Gamblers voted to support Trump’s fall plan. Why? What were they thinking? The Oilers played football every fall in the Astrodome. You weren’t gonna have two teams there. It was truly the power of a conman.
Brandon: John Bassett was considered one of the pillars of the USFL, and fought against moving the league to the fall. He would die shortly after announcing he was pulling his team from the league. Do you believe that under Bassett’s guidance, the league could have survived?
Jeff: No. He wasn’t enough. He was respected and important, but Trump was a freight train by then, and even a healthy Bassett wasn’t stopping the momentum. What sucks, though, is Trump saw his illness as merely an obstacle out of the way. Empathy? Sadness? Hardly. Didn’t even attend the funeral.
Brandon: On your website, you are writing about the top 25 players in USFL history. In your mind, who is the Mt. Rushmore of USFL players that never made it in the NFL?
Jeff: Fred Besana, Marcus Marek, Peter Raeford, Chuck Pitcock
Brandon: The origins of the USFL were built around an ethos called the “Dixon Plan” which called for a salary cap of 1.8 million, but teams were willing to blow by that to get stars into the league. Would a hard cap hurt or helped the franchises?
Jeff: Oh, helped. Hugely. And the plan didn’t even REALLY exist. It wasn’t in the actual bylaws. But the USFL needed a cap in the worst possible way. Without one, people just blew up any sort of competitive balance.
Brandon: What’s the enduring legacy of the USFL?:
Jeff: Four NFL Hall of Famers, two-point conversion, coach’s challenge, teams in Jacksonville and Tennessee, kick-ass uniforms.
Brandon: Finally, there are two new leagues taking on a similar concept of spring football starting up soon (the resurrected XFL and Charlie Ebersol’s new league). Do you believe either league has a chance of succeeding to fill the seeming insatiable desire of fans for football?
Jeff: I do, if they keep salaries in check, focus on regional players staying close to where they played college ball, going heavy on promotions and an emphasis on fun, being inventive without being corny and celebrating whenever a player is signed by the NFL. Not fighting it.
Brandon: The end, If you could encapsulate the book in one sentence, what would it be?
Jeff: The story of the greatest batshit crazy sports league of all time.

You can buy Jeff Pearlman’s book, Football For a Buck, by clicking HERE
You can follow Brandon on Twitter @theBman. You can listen to his standup comedy podcast by clicking HERE and check him out every week on the Geeks & Gamers Sports Wars Youtube channel and podcast network, talking wrasslin’ by clicking HERE.

One Comment on “Exclusive Interview: A Few Words with Sports Author Jeff Pearlman”