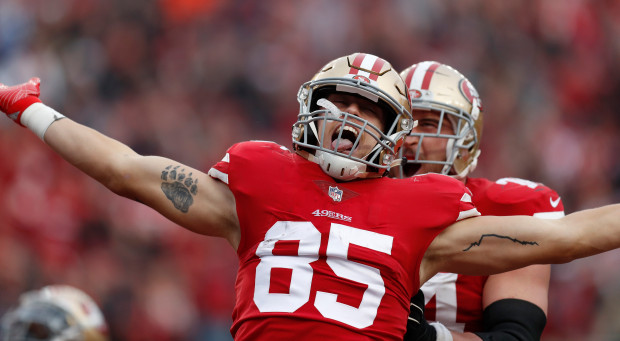 Week one is behind us and it turns out that tight ends are just as bad as I remember them.  Some of you believed that 2017 was a fluke and that Greg Olsen would be able to make it through the 2018 season without getting hurt.  And you were wrong.  Some of you thought that Trey Burton was going to magically become Travis Kelce or Zach Ertz just because he was being paid like them.  And you were wrong.  Some of you thought none of your players would be hurt and that your heart would remain unbroken.  And oh boy were you wrong.

Why you thought you were the genius who could find some magical tight end to fix all your fantasy woes, I will never know.  All I do know is that tight ends are worthless and your team will be worthless because you probably have to start them.  If you have read my waiver wire articles before, you know I don’t believe in burning your waiver priority on tight ends.  They are the hardest position to predict.  But if you insist on wasting everyone’s time, there are plenty of week two waiver wire tight end options available to disappoint you in new and exciting ways.  So let us examine what our best waiver wire tight end options for week two are.

George Kittle – Owned in 37% of leagues – Normally, I don’t recommend grabbing a week two waiver wire tight end, because I hate tight ends and think they are worthless.  I am making an exception for George Kittle for many reasons.  While Kittle’s week one numbers of 5 catches for 90 yards and 1 touchdown were impressive, they also tell an interesting story.  First off, not only did Kittle lead the 49ers in targets, but he accounted for 27% of Garoppolo’s attempts.  He appears to be the primary target in their offense and for good reason.  San Francisco’s receiving corps(e) looked terrible.  The other thing to note about Kittle is that he put up solid numbers against the Minnesota Vikings, who last year gave up the least fantasy points to tight ends.  There is a lot to like about George Kittle and his upside.  But because he is a tight end, he’ll probably suck.

Eric Ebron – Owned in 34% of leagues. – Beware of Eric Ebron, for he will break your heart.  I know what you are thinking.  But Waleed, he had one of the top tight end performances in week one!  What about his 4 catches for 51 yards and 1 touchdown?  How do I know this isn’t the breakout moment every Eric Ebron owner has been waiting for over the last five seasons? We know this isn’t Eric Ebron’s breakout moment, because it never is. You still need to tread lightly with Eric Ebron.  Ebron was only on the field 45% of the time against the Cincinnati Bengals, as opposed to the 94% of the time Jack Doyle was on the field.  Eric Ebron was also only fifth in targets amongst the Indianapolis receivers.  Is he a great situational streaming option at tight end?  Absolutely.  Is he worth burning a week two waiver wire tight end spot on?  Not as long as Jack Doyle is the Colts number one tight end.

Will Dissly – Owned in 3% of leagues – If you are casually looking over the week one tight end performances and come across the name Will Dissly, don’t feel bad if you don’t know who he is.  I read up on this stuff and I barely know who he is.  More to the point, he is a tight end with one good game under his belt, so the odds are very good that you will never need to know who he is again.  Sure, he had 3 catches for 105 yards and 1 touchdown, but a closer examination of his game does not instill me with confidence.  First off, Dissly was only on the field for 58% of the Seahawks snaps.  Secondly, Russell Wilson also did a very good job of distributing the ball evenly among all his weapons, so there is no indication that he will end up a focal point of the Seahawks offense.  Thirdly, they played a Denver Broncos team that gave up the third most fantasy points to tight ends last year.  Finally, rookie tight ends rarely end up producing consistently.  Someone is going to waste their week two waiver wire tight end position on Will Dissly this week.  I just hope it isn’t you.

Jared Cook  – Owned in 47% of leagues – I look at Jared Cook this week and wonder what could have been.  How many times have you believed he was going to be your fantasy football salvation?  And how many times has starting Jared Cook resulted in fantasy damnation?  All you need to know about Jared Cook, I’ve already told you last year.  Just say no to Jared Cook.  I understand that he was the TE1 this week, with 9 catches for 180 yards.  All I am saying is that everything with Jared Cook is going to go downhill from here.  Because history is not on Jared Cook’s side and neither am I.  Don’t use your week two waiver wire tight end pick on a one-game wonder.