Tonight’s Thursday Night Football contest between the Miami Dolphins and Baltimore Ravens was the exact opposite of last week’s Raiders-Chiefs tilt. This one was a laugher from the beginning, and even losing Joe Flacco due to a nasty, cheap hit from Kiko Alonso didn’t stop the Ravens from moving to 4-4 on the year. They’ve put the UK meltdown behind them. A game that ends 40-0 and one team loses their starting QB for the game means there is plenty of opportunity for farce, nonsense and absurdity. Here are five crazy things you might have missed if you had better time management skills than I do and didn’t partake.

5. TWITTER HAS JOKES, PART 3.14159
Alex Collins played exceptionally well tonight, especially in the first half. He was insanely quick and fast, and Twitter had ideas about his former employer.

The Seahawks could use a back like Alex Collins

Who would’ve thought the Seahawks could’ve used Alex Collins at this point in the season.

The Seahawks could use a guy like this Collins.

4. IF THIS IS A CONSULAR SHIP, WHERE IS THE AMBASSADOR

Ndamukong Suh channeled his inner Darth Vader on Ryan Mallett. Many Joe Flaccos died to bring the Ravens the plans to win the game.

3. THAT’S NOT HOW MATH WORKS, MIAMI

This could’ve gone much worse for the Ravens pic.twitter.com/lyajGJs1I1

Griff Whalen almost hilariously fumbled a ball off his dang face. Instead he caught it and saved us from further hilarity. If you remember, he was in on this Special Teams gem, too:

1. WELL, THIS CAT WAS MORE ELUSIVE THAN ANY DOLPHINS PLAYER TODAY, AT LEAST

A cat ran across the field right before the Ravens started taking knees. He was harder to take down than any Dolphin tonight.

I did a Sun Basket dinner partway through this (promo code ABSURDITY… nah just kidding, that would be cool though) and missed literally nothing of consequence. This game was dumb, bad garbage. Tune in to Thursday Night Football next week for the Bills and Jets. I envy the dead. 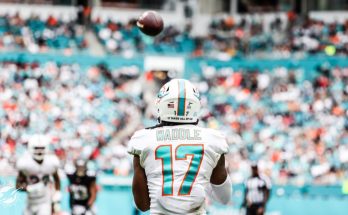 Miami Dolphins, Sorry For Your Loss!