We’re on to Week 8 of the NFL season, and while we only have two teams on bye, we have two of the more impactful squads from a fantasy perspective. We’ll be without Patrick Mahomes, Justin Herbert, Austin Ekeler, Clyde Edwards-Helaire, Keenan Allen, JuJu Smith-Schuster, Mike Williams, Gerald Everett, and Travis Kelce. Throw in the myriad of scrapes, sprains, and tears that players around the NFL, and we might just be in some dire straits for this week. No fear, we are here to help, with three players at each position available in at least 50% of leagues. For those of you who like to talk about how deep your league is, we also have a player available in at least 90% of Yahoo! leagues. Let’s dive in!

Despite being healthy enough to play, the Saints announced that Jameis Winston would be the backup this weekend. Dalton threw the ball 47 times last week, and ended up with 26.5 fantasy points for his effort, finishing as the week’s QB2. He has another chance to dominate this week (note: dominate is used loosely, here, given his two pick-sixes) against a porous Vegas secondary. The Raiders are literally the best matchup to stream against this year, as they give up the most fantasy points to quarterbacks. While they played Patrick Mahomes and Justin Herbert once each, they also gave Russell Wilson and Davis Mills their best games of the season by far. This should be an easy stream for you, now that we know who will start.

Surprise! We have multiple deep dives this week. Ehlinger gets the start in Indianapolis after Matt Ryan came down with an acute case of being washed (and then getting hurt). Ehlinger isn’t very good, but neither is Taylor Heinicke, who he takes on this week. If you don’t know Sam Ehlinger, imagine someone between Taysom Hill and Jalen Hurts, but really they’re just Taysom Hill. This is going to be a “by hook or by crook” accumulation of fantasy points, and a game you probably don’t want to even follow if you have to start Ehlinger. But, the Commanders were just torched by Justin Fields rushing for 88 yards on 12 carries, which is inside Ehlinger’s range of outcomes. Sam also has good weapons at his disposal, with Jonathan Taylor, Nyheim Hines, Michael Pittman, Alec Pierce, and Parris Campbell on the other end of his targets. This is a 14-point week waiting to happen, but you shouldn’t expect anything too exciting.

Walker showed a baseline competency at quarterbacking last week, by handing the ball off to D’Onta Foreman and Chuba Hubbard as much as humanly possible. The Panthers took full advantage of the Buccaneers collapsing in front of their eyes, and Walker finished the game with 177 passing yards and a couple of touchdowns. I would expect another about 15-point week out of Walker this week as he takes on Atlanta. The Falcons have been a disaster at stopping opposing quarterbacks: Joe Burrow had 500 total yards and 4 total touchdowns against them last week, and before that, they gave up the second-best game of Jimmy Garoppolo’s season and the second-best game of Tom Brady’s season, in consecutive weeks. Playing Atlanta brings out the best in quarterbacks, and they reach their near-ceiling against them. Expect that out of Walker this weekend.

The entire Lions offense came crashing down last weekend without D’Andre Swift and Amon-Ra St. Brown. They should both be back this week, which means that we can wipe away Reynolds’ two targets for one catch and 8 yards. Prior to that, Reynolds had three-straight games with at least 8 targets in each game and this helped propel him to being WR23 in the first five weeks of the season. Reynolds gets a Miami team that allows the seventh-most PPR points to wide receivers, and also ranks inside the top ten in fantasy points allowed to quarterbacks and tight ends. That is to say, this should be a get-right game for the Detroit passing offense. Miami’s given up at least 9 PPR points to five different receivers in the last two weeks and should allow for both Amon-Ra St. Brown and Josh Reynolds to get back to what they were to start the season.

It’s not often that a guy gets 23 targets and then is rostered in a lower percentage of leagues than that. But, that’s where we sit with Parris Campbell. Campbell has become the de facto short-area target for the Colts over the last couple of weeks, turning those 23 targets into 17 receptions, 127 yards, and two scores. The Colts had a quarterback switchover, as Matt Ryan is out and Sam Ehlinger is in, so there’s a good amount of “wait and see” surrounding the Colts. But, even if he gets 7 targets or so, instead of 10 (or more), Campbell makes for a great start this week. The Commanders are a sieve on offense, allowing the ninth-most fantasy points to wide receivers. If you figure that Campbell will get at least seven targets, then you’re in for a ride: ten wide receivers had at least 7 targets against the Commanders so far this season, and nine of them pulled in double-digit PPR days, including three in the last two games. There’s also a chance that Ehlinger hones in on Alec Pierce and Michael Pittman, making this a fruitless effort. But, for now, ride with Parris Campbell if you’re desperate.

Things certainly haven’t gotten better for the Los Angeles running game, and that means more of the same from the passing game: lots of quick strikes to Cooper Kupp, Tyler Higbee and, yes, Ben Skowronek. Skowronek has at least 10 PPR points in three of his last four games and has 13 targets, 11 receptions, and 81 yards in his last two games. He’s not a high upside play, but unless the Rams drastically changed how they handle their game plan during the bye week, he should continue to be involved. The 49ers’ defense is a bit of trouble as the Rams’ offensive line fell apart in the face of the Niners’ pass rush the last time they played. But, since they last played, the 49ers lost their CB2 (Emmanuel Moseley) and got beat up along with the rest of the secondary. There should be plenty of opportunities for Skowronek to produce.

Chuba Hubbard and D’Onta Foreman are taking over for Christian McCaffrey now that he’s departed for San Francisco. While Foreman topped a 60% roster rate, we can’t forget about Chuba. Hubbard was the third-down back for the Panthers last week and handled 11 touches for 73 yards and a score. He left the game with an injury but could have returned if needed, according to Panthers’ brass. This week, he gets the Atlanta Falcons. Atlanta gives up the thirteenth-most fantasy points to running backs on the year, but a running back had at least 18 PPR points against them in three of their last four games. The Falcons can be attacked through the air, as they are in the top ten in receptions and receiving yards to running backs. Hubbard should be in for a nice floor game in this one as the Panthers continue to get him involved with D’Onta Foreman.

[UPDATE: Chuba was ruled out. Do not pick up Chuba Hubbard.]

Mike Boone is on IR, and the Broncos snatched Marlon Mack off of the 49ers’ practice squad, much like they snatched Latavius Murray off of the New Orleans practice squad. With no Boone, and with Mack unlikely to be overwhelmingly involved, that means that it’s Murray and Melvin Gordon to carry the load for the Broncos. Murray has at least 11 touches (and a touchdown) in two-of-three games with the Broncos, and has a good matchup this weekend against the Jaguars. The Jags give up the seventh-most running back fantasy points, and they’ve done that despite giving up just five touchdowns on the year to running backs. Murray needs to be more rostered, especially considering the lack of faith the fantasy football populace has in Melvin Gordon.

This isn’t an anti-Dameon Pierce take, so please don’t come for me on that front. But, the Titans are a pass funnel defense, and they allowed 12 receptions to running backs last weekend, including Nyheim going 5/5 on targets and receptions. Burkhead isn’t overwhelmingly involved, but he has played at least 30% of snaps in two of the last three weeks and has at least five targets in three of his last four games. This should make for a good “alright well at least he won’t goose egg me,” play this week.

This one slips right under the radar and is a pure flow chart play, baby! The Cardinals are absolutely dreadful against tight ends, allowing three touchdowns to the position last week against New Orleans. Even before then, they were top-five in fantasy points allowed to the position. Granted, most of those points came from Travis Kelce, Darren Waller, and Dallas Goedert, but once Juwan Johnson drops a 20 burger on you, it’s time to accept your fate as a doormat. Smith was a hot sleeper for a lot of people this offseason, but hasn’t turned in scores. This isn’t for a lack of trying, as he is tied for third among tight ends in targets inside the five (which turn into scores). He’s also tied with Adam Thielen for the team lead. I’m banking on an Irv Smith touchdown in this one, and you can, too. He’s a good stream just for this week, do not get attached.

Remember Mike Gesicki? He’s back, in pog form! The erstwhile top option on the Dolphins has seven targets in back-to-back games, which he’s turned into 9 catches, 96 yards, and two touchdowns. He’s not a long-term play, but who else is the third option on the Dolphins? There’s a great talent drop-off between Gesicki and the rest of the receiving corps behind Tyreek Hill and Jaylen Waddle. This week, the Dolphins take on the Lions, who have allowed at least 8 PPR points to six tight ends in six games already this season, a feat they’ve accomplished while playing exactly one healthy top-ten tight end (Dallas Goedert in week one).

With no DK Metcalf this week, the Seahawks need to turn… somewhere. I doubt that it’s one of the less-talented wide receivers, and it’s probably one of the centerpieces of the Russell Wilson trade this offseason. Fant is still an incredibly talented and athletic player, but the Seahawks just haven’t pulled their head out of their rear end long enough to give him enough targets to matter. Well, now they’re out of excuses. Fant has 15 targets over the last three games, but disappeared last week, catching just one ball for seven yards. The Giants have a strong defense, but they’ve struggled with tight ends lately, as Evan Engram lit them up for 4/67 last week, a testament to them being a top-ten tight end matchup.

Tight End Versus Atlanta of the Week:

I have decided to highlight whoever is playing Atlanta, despite their talent level, because Atlanta is truly dreadful against tight ends. This week, it’s a two-pack of Jeff’s predraft crushes as they take on the Panthers: Tommy Tremble and Ian Thomas. If you need a prayer at a desperation touchdown, they are both near-universally available. 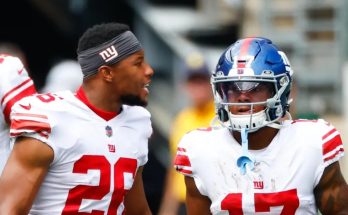