There aren’t a lot of useful tight ends. Instead, we have to look towards the most useful of the least useful… if that makes sense. There’s a stark dividing line in roster percentage between the usable tight ends and the… less usable ones. Unfortunately, the cutoff for sleepers sits firmly in the middle of that divide. For this exercise, I look at players rostered in fewer than 50% of leagues, and usually, I can find someone just about at that line. For tight ends? No dice. Jared Cook at 57% is the seventeenth-most rostered tight end. Tyler Conklin, at eighteenth? 44% rostered. That’s a massive gulf. But, that’s okay! I dug for gold for you in the sub-70% rostered tight ends, and I have two sleepers for you. For you deep leaguers, as every week, there’s a third tight end available in 98% of leagues.

Figures are from Yahoo! Roster % as of Thursday Morning.

Cole Kmet has at least five targets in each of the last four games and has 32 targets in that span. The man is averaging eight targets a game, and I feel like that’s really all I need to tell you about going and picking him up off the waiver wire. But, if you need more, I guess we can talk about Seattle. Seattle allows the sixth-most fantasy points to tight ends and has given up double-digit fantasy days to tight ends in four of their last five games. The only time they didn’t was when Logan Thomas left partway through week twelve, and the Football Team went into panic mode. Kmet is a great start, just as he has been for weeks!

The Ravens allow the fifth-most fantasy points to tight ends on the season. While their crippled secondary allowed them to creep up the “good matchup” ranks, they still are just thirteenth in fantasy points per game to the wide receiver. In steps Uzomah, who has 6, 6, and 4 targets in his last three games. While things didn’t work out perfectly for him then, things should work out for him now. The Ravens are a great matchup for him, and the target volume should sustain a big day. If all of this is familiar, it’s because I wrote a lot of this same stuff before he torched the Ravens for 3 catches, 91 yards, and two touchdowns in week seven.

It’s looking increasingly unlikely like Brandin Cooks will come off of the COVID-19 IR before the game on Sunday. That leaves the Texans with Nico Collins and Brevin Jordan against the Chargers this weekend. The Chargers are really good at stopping wide receivers (they allow the fourth-fewest fantasy points to the position) and truly terrible at stopping tight ends (they allow the second-most fantasy points to the position). Jordan has 11 targets in his last two games and should get at least half of that this weekend against a Chargers team with one massive weakness on defense. 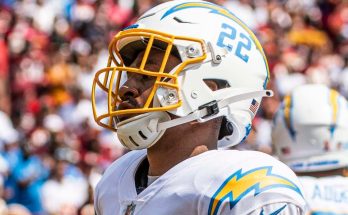