More coronavirus! Who would have thought, huh? Anyway, things are a mess right now! To make matters worse, the NFL is spinning up the bye weeks. Oh boy, that means it’s time for some sleeper running backs to help kick your team into high gear. To qualify as one of the sleeper running backs, a player needs to be on rosters in fewer than 50% of Yahoo! leagues. For all you “Well that’s not what it’s like in my league!!!” types, I offer one player rostered in 10% of leagues or fewer. If he’s not available in your league, well, good luck.

First and foremost, Alexander Mattison is in a position to smash this week and is only rostered in 62% of leagues. Check that out first. Probably not, but it might be a little treat in your free agency pool.

The Jets benched Jordan Howard and moved toward a two-back backfield with lead back Myles Gaskin and change-of-pace back Matt Breida last week. And they won… big. Without Jordan Howard around to steal touches, Breida ended up with nine carries and a catch. I would expect that to continue this week, with Breida picking up between 10 and 15 touches against a truly dreadful Jets defense. The Jets have given up the fifth-most fantasy points to opposing running backs, including seven touchdowns to the position in five games. While I’d make a bet that Myles Gaskin gets one, if there’s two, I’d take a bet that Breida breaks a long one.

Well, it’s either going to be him, or La’Mical Perine. I would bet that Gore ends up with enough touches to make you question your own sanity. He started in weeks two through four and averaged 17 touches per game in that span. He doesn’t do… a lot. He’s just sort of a plodder at this point in his career, but even plodders can fall in for touchdowns. The Dolphins give up the seventh-most fantasy points to running backs, and have given up six touchdowns to the position in the last three weeks. Starting him is going to hurt, like going through a spatial vortex back in time, but if you’re reading this, you’re desperate enough to pass through that wormhole’s event horizon. And uh, it’s a revenge game, I guess that means something, too?

Call it a hunch or a feeling, but I think McKissic will play very well this weekend. He has sixteen targets in the last two games and has turned in respectable flex numbers with those targets. This week, I think he breaks through. This is going to be a sloppy game between two bad teams. That favors the slippery fish, catch-and-run backs. That’s McKissic, who has looked good lately, to a T. The Giants let both Jeff Wilson Jr. and Jerick McKinnon slippery fish their way to touchdowns, but the Rams didn’t need to pull that off in week five to continue the trend. It’s a shot, but a shot that should at least get you a PPR floor. 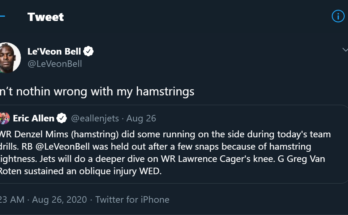