Well, it’s not quite as dire as the Trojan War, but the first two weeks of the NFL season have left our fantasy football squads obliterated. Luckily, we can help you out with some tight end sleepers this week to fill out your team. We promise no Greeks will come out of any of these tight end sleepers… okay, maybe Greeks will come pouring out of Nick Mullens. I’m not Cassandra. We have two tight end sleepers rostered in fewer than 50% of Yahoo! leagues. For those of you in deep, deep leagues, we always offer a player available in at least 90% of Yahoo! leagues.

Logan Thomas ranks fourth in tight end air yards, and only Darren Waller gets a higher percentage of his team’s targets. Unfortunately, Logan Thomas ranks just seventeenth at TE. That’s likely due to Logan Thomas getting “passes” “from” Dwayne Haskins, who has continued his errant ways in 2020. This week, Logan Thomas gets a Cleveland team that let Drew Sample and C.J. Uzomah run roughshod all over them last week. If Haskins can reel in the accuracy, expect a big game for Logan Thomas.

The 49ers are looking likely to preserve George Kittle one more week thanks to the MetLife turf going Chris Kyle on 49ers’ lower extremities last week. That means more Jordan Reed, baby! The 49ers installed Reed as their top pass-catching option last week, and he hauled in seven-of-eight passes for 50 yards and two scores. You’ll take any part of that in a PPR league headed into week three.

This week, Reed goes up against a Giants defense that looks like a bad matchup on paper, but in reality, they took on Eric Ebron and Jimmy Graham in the first couple weeks of the season. Unfortunately for those two guys, it isn’t 2017 anymore. That’s way different than Jordan Reed… Yeah. That’s it.

The 2020 Jets might just be the worst football team of all time, and they gave up 50 and two scores to Jordan Reed last week. Jack Doyle probably isn’t going to play again, and Mo Alie-Cox took advantage of that last week, turning six targets into five catches, 111 yards, and a touchdown. He’s a deep league guy who should provide you with a nice PPR floor if you’re playing chicken with a George Kittle replacement. 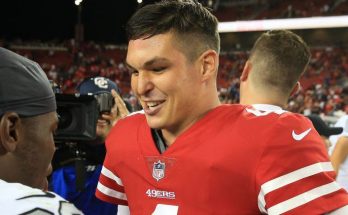