Who Were 2019’s Luckiest Quarterbacks? Is a reprint of an article originally posted in our Patreon community in May. During the offseason, we bring our community original and unique research such as the following:

We like to try to quantify so much about sports. The Moneyball revolution in baseball led to teams prioritizing not getting outs over hitting for power and slap hitting. It also led to measuring luck: the batting average in balls in play (BABIP) statistic took care of measuring the luckiness of things outside of the hitter’s control. A screaming line drive to the shortstop isn’t a hit, but a lazy dribbler up the line that the 3B things will go foul and doesn’t is a hit. You know, luck. What about football? Can you measure luckiness in football? Well, you can try to measure everything outside of a quarterback’s control to see how lucky he can be on a football field. Get out your notepads, it’s time to go to class, and it’s time to try to define quarterback luck.

The idea to quantify quarterback luck came with my discovery of the interceptable passes and expected touchdowns statistic on PlayerProfiler.com. With football, you generally measure what happened, rather than what should have happened. It’s hard to measure how many yards a running back should have had because each twitch of the ball carrier, of a blocker, of a would-be tackler sets off a butterfly effect that means you can’t really tell what would have happened if an RB hadn’t missed a lane, or if they’d slipped that ankle tackle.

With quarterbacks, it’s a little bit different. A pass that hits a DB in the hands should be an interception and the same with a wide receiver. Still, you have to account for drops in both, which is why the interceptable catches statistic and drops can go a long way towards measuring quarterback luck. After all, you can measure a good pass and a bad pass, but what happens once the ball leaves a quarterback’s hand is completely out of his control.

Baker Mayfield definitely stands out here, as his 21 interceptions ranked second in the league behind Jameis, but between 25% and 30% of them were unlucky interceptions. Jameis Winston also stands out, as his 30 interceptions defied reality. Matt Ryan and Kyler Murray stand out, as well, as they are actually good quarterbacks who should see their luck get better in 2020. But what about the luckiest QBs?

It’s not shocking that you see three of the five guys on this list with single-digit interceptions. It takes some great skill and/or incredible luck to pull that off. Poor Mitchell Trubisky and Andy Dalton had their luck run out as soon as the offseason hit and they were relegated to backup roles. Gardner Minshew could be in for a world of hurt this season if the touchdown regression hits.

If you remember from the top, interceptions weren’t the only part of measuring quarterback luck. What about drops? Well, drops are generally a function of the wide receivers (they are 100% a function of the wide receivers), but if you’re trying to strip away everything from what a QB does, you need to account for the drops. If a pitcher has a shortstop behind him who has no range, it changes his BABIP (“luck”) measurement, something that is out of his control. If we are to measure quarterback luck, we too must account for the hands of the guys a quarterback throws to.

Using the same methodology as interceptable passes and expected interceptions, I figured out expected drops using catchable balls and drops. By the way, about 6.9% of QB passes get dropped by the would-be receivers. So, lay off them next time it happens: it’s going to happen a couple times a game. Again, all this data came from PlayerProfiler.com, so huge shout out to them. When it came to drops, here are the luckiest and unluckiest quarterbacks in 2019:

As a 49ers fan, I can guarantee that this definitely wasn’t a backdoor way into quantifying that Jimmy Garoppolo was screwed over by insane amounts of drops by the 49ers’ receiving corps. Definitely. Nope, not that. Couldn’t be me. Anyway, drops plagued the 49ers all season, and it cost them the Monday Night Football thriller against Seattle, as several drops cost him and the 49ers against the Seahawks that night. Now, I acknowledge that this is a function of wide receivers. Dak Prescott was the only QB with two surefire top-flight receivers on this list, and they betrayed him. Still, for guys to end up here, their wide receivers did them dirty, so expect a step forward from these guys this year.

What then, of the guys who had wide receivers with grubby little paws, who helped their QB by not dropping the ball?

There’s Matt Ryan, again. Maybe his inevitable regression isn’t so inevitable? Then again, throwing to one of the best pass catching TEs and one of the best WR duos in the league will lead to a lower-than-expected drop rate. Ryan Tannehill to A.J. Brown was a money connection that stands out here, but Wilson, Brees and Stafford are not surprising. Drew Brees has held the accuracy record multiple times, Wilson has one of the weirdest never-miss connections with Tyler Lockett, and Stafford’s WR1 has glue glands where his sweat glands should be. Again, I acknowledge these as functions of the receivers, but what the receiver does with the football is out of the quarterback’s hands, just like a pitcher can’t field for a centerfielder and track down and dive for a ball to the gap.

I wanted to present these two together, as you can see that there isn’t a lot of positive correction coming for unlucky quarterbacks. Whatever goes into the secret sauce over at playerprofiler.com mostly accounts for high luck quarterbacks coming back down to earth. Looking over the list of luckiest quarterbacks, it seemed to be a mobile quarterback thing, but then Tom Brady was in there, so all that went out the window. That’s the joy with luck: it’s random.

Time For Some Math

Once I had the statistics ready to go, I want to figure out a way to best weigh the statistics. After all: a dropped pass isn’t nearly as devastating as an interception, but it still sucks. Of course, the tried and true method is EPA. Unfortunately, I do not have granular data on these drops, so I had to figure out an “average” EPA lost by an incompletion. I kept trying to run pro-football-reference queries for play-by-play data on incomplete passes, but I repeatedly broke the website. So, in the end, I pulled a random sample of games to get an “average” EPA lost by a drop, which came out to an EPA of -0.923 points per incomplete pass. A drop is generally an incomplete pass, so I weighted the drops that way.

I followed the same methodology for interceptions, though running queries for interceptions didn’t lock up the website. I can tell you that the average interception led to an EPA change of 3.891 points per interception last season. What a player does with the football once it’s picked off is mostly independent of the QB, so I also lump the pick sixes in there as random luck.

Obviously, I can tell you how many points a touchdown adds (six, not seven!), so I multiplied the difference between expected touchdowns and touchdowns by six. Then, it was as easy as adding up all the weighted values and dividing it by the number of pass attempts, giving you the… luck… quotient(?) of each quarterback. That gave me this list of luckiest and unluckiest quarterbacks:

Now, this is where I get a little hinky with luck. A lot of these quarterbacks were flat out terrible, which might account for their place among the luckiest and unluckiest quarterbacks. But that doesn’t account for Mitchell Trubisky and Daniel Jones ending up in the top-five luckiest QBs. I guess bad quarterbacks can be unlucky, as well. Again, Matt Ryan rears his ugly head as a good unlucky QB right off the board as the sixth-unluckiest QB last year.

Hopefully this goes a long way to sorting out whatever arguments you might be having about who was just unlucky last year, and who was just plain bad. 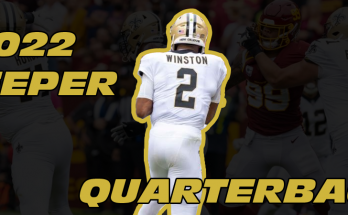