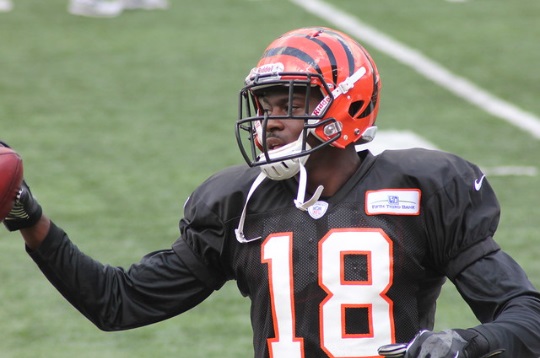 A.J. Green missed the entire 2018 season with a foot/ankle injury that spiraled out of control and ended with the Bengals placing Green on IR in week sixteen. This came after he missed seven games in 2018. The Bengals decided they wanted to keep A.J. Green around for one more year—likely while they build up rookie QB Joe Burrow—before signing him to any sort of extension. Green and the Bengals have a mutual interest, so don’t be surprised if you see an editor’s note updating these contract terms sometime in the future. What does this mean for your fantasy football teams in 2020? Is A.J. Green a fantasy football value, or a dud?

If you know about franchise tags, you can skip this part. The Bengals placed the Franchise Tag on A.J. Green. This is a one-use annual designation for teams that lets them keep a player around for one more year. It means the player cannot negotiate or sign with another team and essentially locks them into their existing club. For 2020 wide receivers, the compensation sits at the average of the top-five players at each position in 2019 at that position. For wide receivers, it is just under $18 million. So, don’t cry for A.J. Green, as he is getting plenty of money. Maybe, more money than a guy who will play the season at 32 years old who has missed 29 games in the last four seasons should receive.

What This Means for The Cincinnati Bengals

A.J. Green, functionally, has not played for the Bengals since their week nine bye in 2018. Since that time, Cincinnati’s gone 3-21, winning just one game between November 11, 2018 and November 24, 2019. Before losing Green in 2018, the Bengals were 5-3. That says a lot about their need to get Green back into the fold for 2020 no matter what; they were a somewhat respectable ten-win franchise with him, and a bottom of the barrel dumpster fire without him. This means good news for likely incoming quarterback Joe Burrow, who will need to have Green alongside weapons Joe Mixon, John Ross, and Tyler Boyd. Tagging Green also frees up draft capital for the Bengals to use to bolster their failing offensive line, which can only lift up everyone in the offense.

What this Means for Fantasy Football

A.J. Green will likely go somewhere around WR20 to WR30 in drafts this year, and that’s a perfectly cromulent place for him. He carries incredible upside but rock bottom downside, given his injury history. My only concern with Green is his quarterback. Joe Burrow should make a seamless transition to the NFL, but what about his star wide receiver?

Since 2010, fourteen first-round rookie quarterbacks have thrown at least 400 passes. Their top-supported wide receiver averaged 148.8 fantasy points per season, and ended the year, on average, as WR35. Two WRs ended up inside the top-20, and only four guys ended up inside the top-25. Over the last two seasons, four WRs met these criteria and three finished between WR35 and WR37. That’s a good nestling spot for A.J. Green in 2020, somewhere around a back-end WR3.