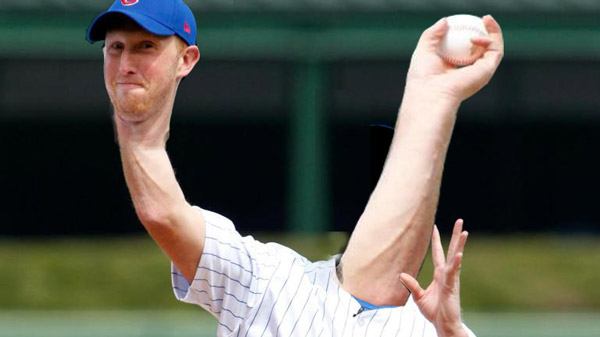 The Chicago Bears are in year three of a rebuild that saw them finish with a record of 5-11.  Subsequently, that is the exact same record they started the rebuild with.  It makes you think…. that the Bears might not know how to rebuild a franchise.  Looking at their record, start to finish, you might assume the Chicago Bears roster is the true disaster.  But the Bears have one of the youngest rosters in the NFL and have quietly put together a very exciting core.  For the 2018 disaster draft, the Chicago Bears will desperately cling to that core.

Mitch Trubisky is the man Ryan Pace bet his job on in the 2017 NFL Draft.  If he isn’t holding onto Mitch, he might as well quit now.  On the defensive side of the ball, three players are the backbone of this defensive front – Eddie Goldman, Akiem Hicks and Leonard Floyd.  On the offensive side, Cody Whitehair and Kyle Long are their two best lineman and have shown signs of being able to be amongst the best at their positions.  Finally you have Tarik Cohen, Jordan Howard and Adam Shaheen.  Jordan Howard has been one of the top rushers in the NFL the last two season.  The Bears would be foolish to let one of their most productive players go.  Especially when you consider how few productive players they actually have.  Tarik Cohen and Adam Shaheen are staying due to a combination of draft capital and their potential upside.

The maybe’s are maybe’s in theory, but it is unlikely any of them would be available in the disaster draft.  Eddie Jackson and Adrian Amos are a dynamic safety duo that is cost controlled, since both are on thei rookie contracts.  And considering all their cornerbacks are hitting free agency, they need the stability in their secondary.  They just signed Willie Young to a contract extension and he is their third best pass rusher.

Now the last four players are more questionable.  Josh Sitton is a Pro-Bowler when healthy.  Unfortunately, over the last couple of seasons, his health has been an issue.  On top of that, he is on the wrong side of 30.  I could see the bears letting him be available for someone younger and cheaper.  But keeping the interior of their offensive line intact would have to be appealing.  Danny Trevathan and Jerrell Freeman are interesting to consider.  On the one hand, they are both clearly the top two interior linebackers on the Bears.  But Nick Kwitkowski has been developing nicely and the Bears could decide to dump one of the two to keep him along.  Then the question becomes which linebacker do you keep?  Jerrell Freeman has been the most productive of the two and he is also cheaper.  But after his PED suspension, questions arise about his dependability.  Finally, Jonathan Bullard was a 2017 3rd round pick and would allow the Bears to keep one of the more underrated 3-4 defensive lines mostly intact.

Disclaimer goes here: Roster is as of January 13, 2018 and salary figures are from Spotrac.com