The Super Wild Card round of the NFL Playoffs lived up to its name! That is, right up until Monday Night Football when the Cowboys laid the smackdown on the Buccaneers. But, before that, it lived up to its billing. Will this week of NFL action live up to the billing? It’s too soon to know, but given that this is the best weekend of football of the whole year, I have a sneaking suspicion that last weekend’s amazing slate was just the appetizer. Let’s dive into previewing this week’s games!

How the Jaguars Win

I mean duh, right? Even when he wasn’t scoring touchdowns, Lawrence was the key component of the Jaguars to their successes this season. In the last nine games of the year, when the Jags rounded into shape, Lawrence averaged 274 yards per game and protected the football, with a 17:2 TD:INT ratio in 0that span, with a 104.6 QB rating. This was an increase of 30 passing yards per game, and an improvement from his 13:6 TD:INT ratio in the first eight games of the season. Trevor Lawrence leveled up in the second half of the year, and it led the Jags to victory. You could even see bad Trevor and good Trevor all in one game last week, as the Jags battled back from a hole covered in long and luxurious locks.

This one is pretty simple: you can’t get Trevor Lawrence killed by the Chiefs, or else you won’t win the football game! Including the playoffs, the Jaguars sit at 10-8 on the season, and they gave up more than two sacks four times, going 1-3 in those games. That means that they went 9-5 in the games where they were able to keep Trevor Lawrence clean. According to The 33rd Team, the Chiefs are middle-of-the-pack in terms of quarterback pressures on defense, getting pressure on the quarterback 34.3% of the time. The OL doesn’t just play into Trevor Lawrence staying upright, it also lets Travis Etienne rip big holes in the defense. This is where I wish I had a fun little stat about Travis Etienne’s yards before contact in wins versus losses, but the Jags won his six worst games in that regard this year. So, just trust me that the offensive line is important.

How the Chiefs Win

The Chiefs won five-straight games to finish the season, and they did that thanks to the rushing of Isiah Pacheco and the receiving chops of Jerick McKinnon. While Clyde Edwards-Helaire might return this weekend, it’s the two who played key roles in that five-game win streak that will keep the Chiefs punch their ticket back to the AFC Championship Game. Over the last five games of the season, the two backs played key roles in Chiefs’ victories in their own way: Pacheco averaged 12 carries for 62 rushing yards, and McKinnon averaged 5 catches for 55 yards in the last five games. With the Chiefs’ receiving options outside of Travis Kelce looking bleak, the Chiefs will need to lean on these two backs to find success.

The Chiefs were one of the best defenses in the NFL in one key statistic this season: only five teams in the league allowed fewer yards per pass attempt on defense. But, there’s a bigger statistic that is directly proportional to the Chiefs’ success: passing yards allowed. The Chiefs allowed over 250 passing yards just five times this season, and they were 3-2 in those five games. In the other games, they went 11-1, meaning that despite the offensive prowess, the defense reigned supreme in the Chiefs’ victories, and they’ll need them to shine this weekend.

My Pick: The Chiefs

How the Giants Win

The Eagles were one of the best defenses in the NFL, so there’s not really a good statistic for how they did against opposing running backs. The Eagles allowed the eleventh-fewest running back rushing yards, the fourteenth-fewest running back receiving yards, and just fifteen running back touchdowns this year (which ranked with numerous other teams for the dead middle of the NFL ranks in this statistic). Saquon Barkley played just 20 ineffective snaps against the Eagles this season, finishing with 11 carries for 48 yards against this defense. But if the Giants win this weekend, it’s because Saquon gave them something he couldn’t against the Eagles, but he could against every other team: a big game. Saquon had 48 yards in his one game against Philly this year, but averaged 107 yards per game against the rest of the league.

The Giants blitz the opposing quarterback more often than any other team in the league, according to Pro Football Reference. They blitzed on 39.7% of opponent dropbacks this season, and they were the only team to blitz more than 35% of the time on the year. Unfortunately for the Giants, the Eagles have decimated teams that have blitzed against them this season. It will be an interesting game of cat-and-mouse with Kayvon Thibodeaux and Leonard Williams among the cats and Jalen Hurts representing the mouse.

How the Eagles Win

I hate to do two games on Saturday where three out of the four key players are all quarterbacks, but that’s how these games shake out (and it’s mostly different tomorrow… maybe). But, with Jalen Hurts’ hurt shoulder carrying the Philadelphia Eagles’ chances to make it to the NFC Championship Game, it feels appropriate to make him the key player for Philly. Thanks to the injury, Hurts hasn’t thrown a touchdown since week fourteen. While he rushed for three touchdowns in week fifteen, and only played two games in that span, the fact that he’s yet to throw a touchdown since week fourteen is, in fact, true. But, here’s the real problem: from weeks one through fourteen, with Jalen Hurts ostensibly healthy, the Eagles averaged 35 points per game. Over the last four weeks, they’ve averaged just 23 points per game. That 12-point drop could be enough for the Giants to pull off an upset in this one, as the Eagles won by just 6 points in week eighteen when these teams met, after waxing the Giants with a healthy Jalen Hurts by a final tally of 48-22 in week thirteen.

The Philadelphia Eagles will need to get after Daniel Jones in this one, and the Eagles can easily weather a game where Jones runs the football as much as physically possible. Unfortunately for the Giants, running will be the best chance they have to win this one. The Eagles’ secondary spent all season stifling teams, allowing the second-fewest passing yards per game on the year (207 per game) while allowing the ninth-fewest passing touchdowns and garnering the fourth-most interceptions. The Eagles were a terrible pass defense to go up against this season, as Daniel Jones learned in his one matchup against them (when he had 169 passing yards and a pick on 27 pass attempts).

The Philadelphia Eagles were one of the best teams in the NFL, not just because of A.J. Brown, DeVonta Smith, and what Jalen Hurts can do passing, but also because they’re one of the best teams rushing the football inside the five-yard line. Half the league had more than 20 carries inside the five, and the Eagles led all those teams in touchdown rate inside the five (48.9%). The Eagles also had an incredible dedication to the run around the goal line, as they led the NFL in rush attempts inside the five, with 45 such attempts over the course of the season. The Eagles love to get it in short and punch it in, and that will be key to them defeating the Giants this weekend.

My Pick: The Eagles 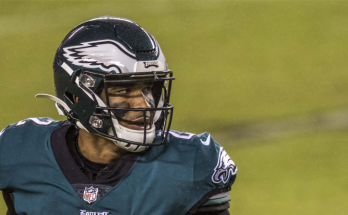